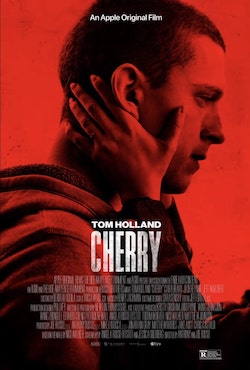 The last time we’ve seen the directing duo of brothers Anthony and Joe Russo in filmmaking action was when they culminated over a decade’s worth of superhero blockbusters of an extraordinarily popular cinematic universe with the highest grossing film of all time, “Avengers: Endgame” (well, actually now, second highest.)

Now, they are switching gears for their next directorial project to tell a story based on the 2018 best-selling semi-autobiography written by U.S. Army veteran, Nico Walker. His novel “Cherry” illustrates his life throughout college, which includes his horrifying post-traumatic experiences after being a soldier in the Iraq War and robbing local banks while addicted to drugs during the opioid crisis. This is all told through the perspective of a fictitious unnamed narrator.

As natives on the wayside of Cleveland (the same neighborhood Walker grew up in) with experiences of family members obsessed with opioids and knowledge about the subject, according to an interview with Variety, it would make sense for talented directors such as the Russo brothers to tackle a societal problem personal to them by adapting a well-executed story that they bought the production rights for for $1 million. It’s unfortunate that the final product is anything but.

The main problem with “Cherry” specifically, is that it seems to be way more focused on the style of filmmaking and the unique tricks that the Russo brothers utilize in the film as opposed to making a story and writing characters that resonates with the audience about Walker’s life and the opioid predicament. The examples that I can itemize for this argument are two fold.

Firstly, the narration feels very snappy, yet unnecessary. The opening sequence shows Nico Walker breaking the fourth wall by talking to the audience during his robbery scenes, but at other times, he narrates about things that don’t even need to be narrated, like how a drunk man ran over a curb to drop him off and never saw him again.

Secondly, one of the decisions used in the film by the Russos is that the cinematography feels stylistic, yet out of place when different chapters would feel like a different genre of film. I was especially put off when we get to the second chapter, where all of a sudden the aspect ratio changes for no particular reason, containing dutch angles and bizarre placement of red text on the screen of the exact same name-calling phrases a drill sergeant would use on a recruit. It felt like the movie, for a moment, wanted to have the cinematic artistic aesthetic of a Stanley Kubrick film, but it doesn’t fit in conjunction with the rest of the movie and feels like it’s too impressive for its own good.

If there is a silver lining to this film’s disappointing result, it would have to be that it is pretty much an acting showcase for Tom Holland’s visceral performance as the main character. His portrayal of this character suffering through PTSD after the horrors of war and as a drug addict is performed with such authenticity and believability thanks to the direction given by the Russos.

“Cherry” isn’t a bad movie per se. It has its positives to be sure, but it’s ultimately what happens when the style of a film over-saturates the message about opioid crisis, overshadowing your investment of the characters and its thin, middling narrative that goes on for longer than it should. If this was told with a shorter running time, less indulgence and didn’t have a sappy, cheesy ending on top of it, this would’ve been a film that made the Russo brothers much more than one-trick ponies with the superhero genre.