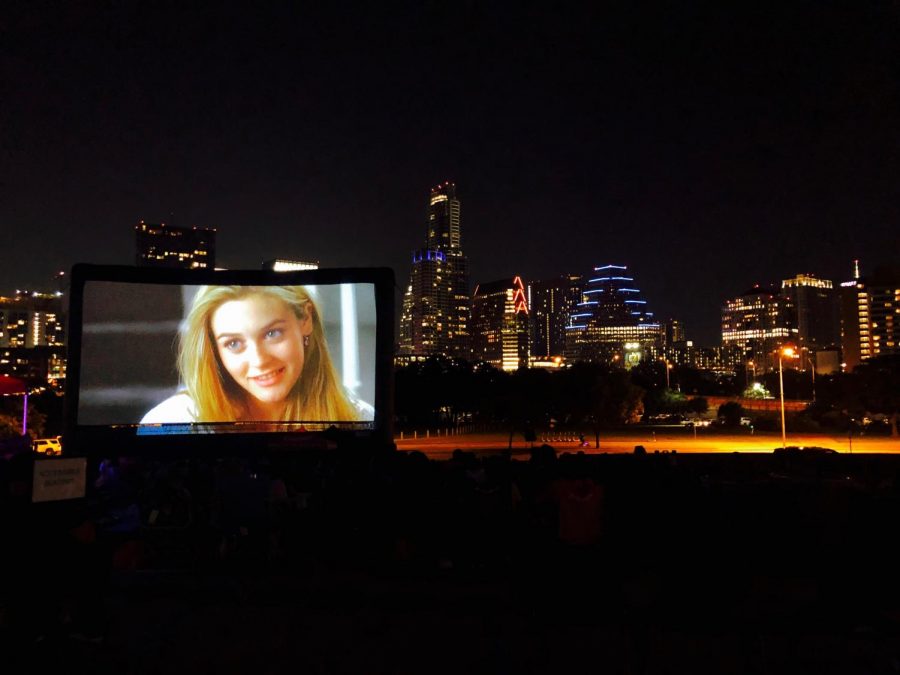 "Sound and Cinema” is a series of live music accompanied by the showing of a film at the Long Center Lawn. Last Friday, local band Darkbird performed before a showing of “Clueless.”

I biked down South 1st Street to the Long Center to see a show from a band called Darkbird before a showing of “Clueless” on Sept. 3. The day after, my mom called me to ask how it went.

Walking up to the Long Center’s “Sound and Cinema” ticketing gates around 6:30 p.m., 30 minutes past the time that the website said that the gates would open, I overheard a couple momentarily bemoaning their bad luck.

“If I had bought the tickets, y’know, I would be more disappointed. But, since it’s free, I’m cool that we couldn’t get in,” one of them said. They left.

“Why exactly did that couple get turned back?” I asked one of the people scanning tickets under their tented box office. He explained that they had been turning a lot of people back, actually, because they hadn’t brought their proof of vaccination card or results from a negative PCR test in a physical copy. Some had pictures on their phones, others had nothing. All told, I’m glad I have my vaccine card permanently smashed like a soggy cornflake into one of the folds of my wallet.

Past the ticketing station and up the stairs onto the bizarrely (pertinent to the event) expansive outdoor H-E-B-branded deck, I saw the food trucks that Do512’s Instagram account touted, which were across the way. I browsed for something to eat. Amy’s Ice Cream… not now. Southside Flying Pizza… hmm. I couldn’t find the barbecue place mentioned on the roster, so my hunger found chicken shawarma and fries from Shawarma Point. Temporarily (silently) disappointed at the lack of options, I popped a squat near the back of the Hartman Concert Lawn, abutting the deck, to eat.

I sat in silence for a little while as my attention flickered from birds flitting across the under-construction section of Austin’s skyline to Spikeball-ers, with snot running down my philtrum, the spicy reprisal that I’d have to face the following morning. The silence morphed into covers and originals from Darkbird, an ethereally branded Austin-based group that I noted seemed earnestly ebullient. “We’re gonna be so big,” announced the lead singer endearingly, later, after the show. All the while, moms stood up from lawn chairs or blankets and bobbed to the rhythm with their children dancing in one arm, their drinks dangled and perspiring in the unoccupied hand.

The sun crept west down the Colorado River as Darkbird’s set was coming to a close. A pleasant gust of wind guided a welcome compliment my way.

“Nice shirt,” a woman told me.

I thanked her, and mentioned that I was at the event with the school newspaper and was apprehensively looking for people to interview. She graciously sat down next to me and we continued talking as the music portion of the night came to a close. She was with family, as were many of the other event-goers, and told me she had recently returned to Austin after living in Lafayette, LA for a number of years. She sounded glad to be back, adding that Austin had changed a lot since she’d last been here. I briefly looked over my shoulder at the skyline, still developing. I told her that it hadn’t been long since I had spent my lone semester in Austin, only a summer, but that life alone in the city still sometimes feels unfamiliar and scary.

She encouraged me, gesturing me to look around at the people in attendance, reassuring that all of these people are nice and would answer any question I had; that the city is filled with people like this. “Clueless” began soon after our conversation ended, and I enjoyed the rest of my night among the ambiently pleasant crowd of strangers. Watching Cher realize that she was in love with her stepbrother, I realized that I might be in the midst of discovering a strange love within my own life, too: a love for the unfamiliar and scary.

If you’re as clueless as me about where to begin exploring in Austin, start by inviting whomever you’d like to Sound and Cinema at the Long Center on a September evening. Even though the event is still in a bit of a beta phase due to the COVID-19 delta variant concerns, it’s an easy trip from anywhere in Austin. And if you remember a physical-copy vaccine card or negative PCR test, the venue is “free”—“cool” as the evening breeze off of the river.