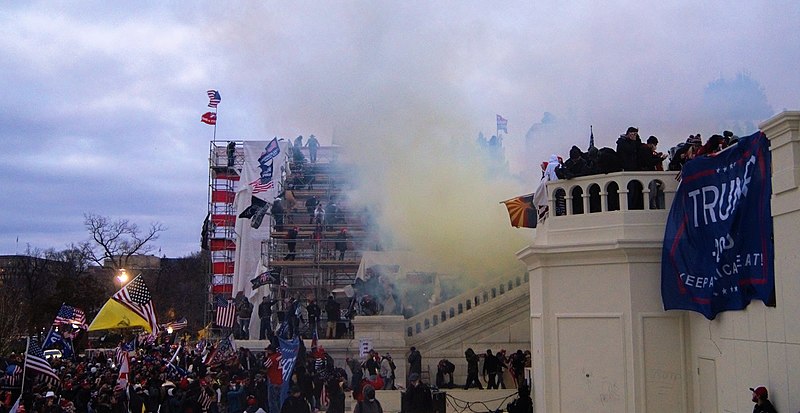 After a mob of Trump supporters stormed the Capitol, hundreds face Federal crimes. A Justice for J6 Rally was held on Sept. 18th.

Nine months after the Jan. 6 “Stop the Steal” rally — in which a number of Trump supporters stormed the Capitol in an effort to prevent the certification of Joe Biden’s 2020 election victory — a group of protesters gathered in Washington, D.C. on Sept. 18 for the “Justice for J6 Rally.” The crowd wanted to show support for rioters who were arrested and charged in January, arguing that they weren’t treated fairly. However, the protesters were vastly outnumbered by police, press and counter-protesters as anxieties increased over the possibility of another violent clash.

The rally was organized by Look Ahead America, a non-profit organization founded by Matt Braynard who worked for the Trump campaign in 2016. In a press statement released the night before the protest, Look Ahead America claimed that the reason for the rally was to show support for “those who have been charged with nonviolent offenses to protest their disparate treatment at the hands of the Department of Justice and the Judiciary.” They also reaffirmed their intention for this to be a peaceful protest, saying that they “condemn political violence in all its forms.”

Despite the organizers’ claims that this would be a peaceful protest, local police and other security forces were on high alert. The event sparked concern for another US Capitol attack akin to the original one in January. A law enforcement source told CNN that “the Metropolitan Police Department will be fully activated” with many police officers being posted on the Capitol grounds. They erected a temporary fence around the Capitol to ensure that no protesters could access the grounds. The Defense Department also authorized 100 National Guard troops to support D.C. police in an effort to ensure they don’t make the same mistake as Jan. 6, when the National Guard was deployed after the Capitol had already been breached.

In the end, the rally had far fewer attendees than expected; only about 100-200 people showed up. They were met by hundreds of police officers, counter-demonstrators and reporters, bringing the estimated total of the crowd to about 400-500, according to Capitol Police. The event was largely peaceful, with police interceding only a few times to ease tensions between protesters and counter-protesters. In total, police made four arrests, one of which was a man carrying a large knife, but it is unclear the connection he had with the protests. Braynard claimed that the low turnout can be attributed to a fear among supporters of the expanded security measures and the ongoing arrests in connection with the Jan. 6 attack.

“This is basically a cult-like following. A cult needs its leader. The lack of Trump’s presence lowered turnout. If Trump had said he would be there, there would have been a tremendous turnout of his followers,” Thomason said.

Though the organizers promised that this event would not be a replication of the Jan. 6 attacks, many were still concerned that the protesters would escalate the tensions to an alarming level. Thomason describes the protesters as “propagandists” who have created “an angry mob [that] has the potential to do bad things.” He warns that though the protesters may not directly attack the Capitol building again, they continue to pose a significant threat to our democracy.

“It could be attacks on voting locations, burning ballots, intimidating members of the public from voting, threatening elected officials. At some point, we need to consider the level of these attacks and misinformation campaigns as terrorism,” Thomason said.