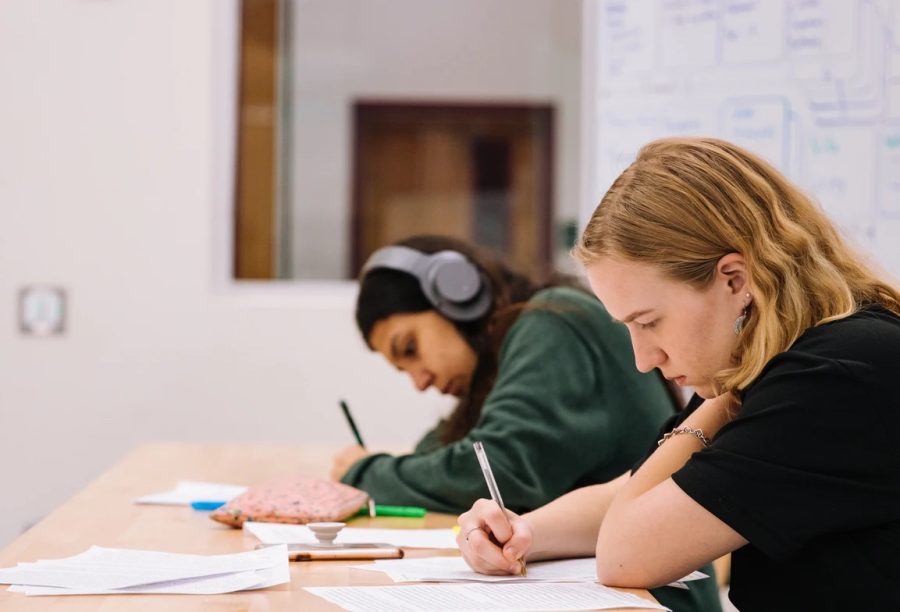 For the first time in nearly two years, students of St. Edward’s University are back to taking exams in person. Students and professors share how nearly two years of virtual learning, with exams largely being made open-note, has affected their ability to transition into in-person learning.

Entering her final year at St. Edward’s, Annie Simnacher says it’s one of the “chillest” semesters she’s had. She also shared the significant impact COVID-19 had on her college experience, perhaps echoing thoughts of other students.

Simnacher also shed light on the impact this shift has had for fellow St. Edward’s students. “Classes will be hybrid, online and in-person, and there’s a lot of confusion [around] ‘Am I supposed to be in class today? Am I online today?’ And then when we have groups in our classes that are hybrid, it makes it even more confusing,” Simnacher said.

For Simnacher, this shift back to in-person learning has been positive as she, like other students, really struggled learning via computer screen. “I had a really hard time sitting down and holding myself accountable.”

With no desk, she sat on her bed. This caused her to struggle dividing her time between “school and play,” Simnacher said. Easily distracted, Simacher would do laundry and other things to pass the time. And because learning was online, professors would post the lectures. This caused Simnacher to feel taking notes during class was not necessary. This, she later realized, was a mistake. “Since everything was online, the professors would post the lectures, so I felt like I didn’t need to take notes. But, no. For my brain to retain information, I need to be taking notes,” she said.

This could be a lesson to other St. Edward’s students who, like Simnacher, took a more relaxed approach to their academics when learning virtually. In the same sentiment, Simnacher made a similar observation about tests that were held virtually, instead of the usual in-person testing prior to the pandemic. “I think the in-person tests are important because it forces you to study…but when it’s open-note, it’s, ‘oh, well I’ll just figure it out during the exam.’ But that didn’t work out too well for me,” she said. Along with online learning, and exam taking, comes the likelihood of cheating. On a final note: “When it’s online [cheating] is inevitable,” Simnacher said.