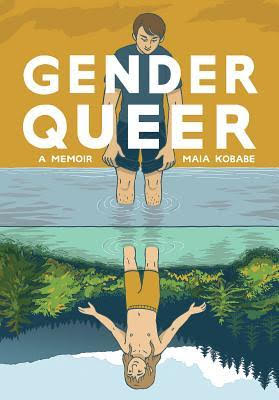 "Gender Queer" by Maia Kobabe is a memoir that focuses on helping struggling children with gender identity, while also enlightening anyone who picks up the book about transgender and non-binary issues.

Gov. Greg Abbot drew controversy regarding his stance on abortion and vaccine mandates and recently found himself receiving more criticism regarding his opinion on books featured in schools. Abbott is looking to set a new standard for books in schools: prohibiting books with overtly sexual content from being placed in school libraries. While this seems reasonable on the surface, the books Abbott mainly wants to remove are those with LGBTQ characters. He referred to these books as “pornography,” stating that they contain “obscene content.”

Books included in this initiative were “Gender Queer: A Memoir” by Maia Kobabe and “In the Dream House” by Carmen Maria Machado. “Gender Queer: A Memoir” discusses Kobabe’s gender identity journey, with Abbott claiming it contains graphic illustrations of sexual acts; “In the Dream House” is a memoir about an abusive relationship between two women that Abbott claims contains graphic descriptions of sexual acts. These are just two of the books that have been described by Abbott as “pornography” and have been removed from libraries and classrooms in the Leander Independent School District.

In a Nov. 8 letter to Texas education officials, Abbot wrote, “Given this negligence, the State of Texas now calls on you to do what the Texas Association of School Boards refuses to do.” He also stated that his mission in implementing these new standards is to “ensure transparency about the materials being taught in the classroom and offered in school libraries.”

Using the word “pornography” to describe these books is questionable because it has very negative connotations. That word implies something that is unlikely to be used in schools in the first place, and would make me question the validity of his statements. Improving his wording by saying the books are inappropriate for high school students and demonstrating his reasoning would help create an open discussion regarding the issue.

Wanting children to be shielded from inappropriate sexual content is one issue, but having all of the content in question be LGBTQ-focused raises questions of other motives. I have to wonder if Abbott has more issues with the LGBTQ aspects of these books than the sexual content aspects. If that is the case, he may be trying to disguise his motives as something else by being dishonest.

Adolescents need to learn lessons of acceptance and all types of relationships, making some of this content potentially valuable to them. Maybe this would have come off better if Abbott had suggested some alternative books with diverse content rather than simply removing the books with LGBTQ themes and characters.