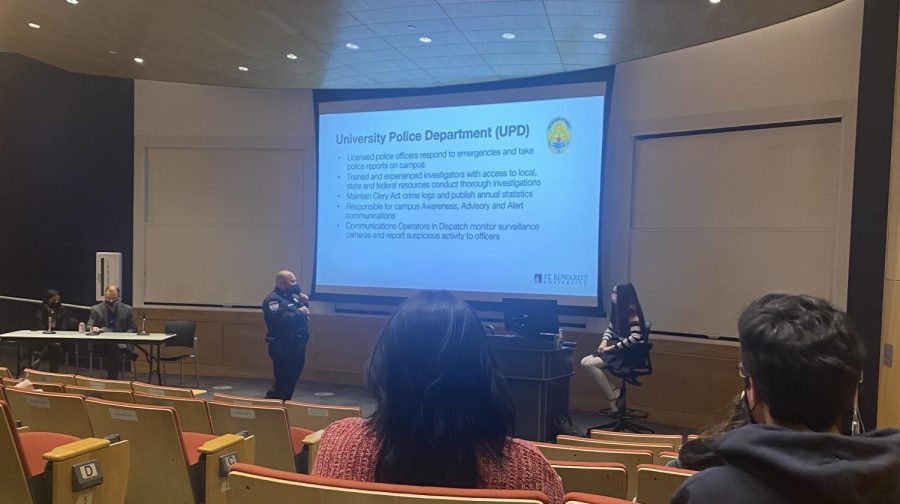 UPD Chief Huerta speaks at the It's On Us meeting. This meeting was open to all of the campus community.

This article contains information regarding sexual assault and violence.

In response to a crime advisory on Nov. 10 regarding an on-campus aggravated sexual assault on Nov. 7, It’s On Us, an organization dedicated to promoting awareness of sexual assault on campuses, held an open meeting about stopping sexual violence on campus and providing services for St. Edward’s University students.

“We needed a place as a student body to hear from administration about what’s being done to keep us safe,” Destiny Nicoll, president of the St. Edward’s chapter of It’s On Us said Thursday.

The University Police Department is in charge of the investigation on the crime that took place Nov. 7 at the Maryhill and Hilltopper Heights Apartments. According to Chief Huerta, the dispatch center is monitoring cameras in the area in which the incident occurred. UPD has also increased patrol presence at night to now at least three officers from the previous two.

“The person has not been identified and we’re doing everything we can to deter that person from coming back and not committing a crime in that area,” Chief Homer said of the decision to increase night patrol.

In response to questions raised regarding another sexual assault that occurred in the same apartments Oct. 15 and an assault in August as reported on the university crime log, Chief Huerta explained the incidents are unrelated.

“When there’s no serious continuing threat we don’t put out an advisory,” Chief Huerta said. “We had a handle on those incidents from the beginning.”

All officers in UPD have also gone through SAFE Alliance training, in which officers are taught about what a survivor is going through in order to make better decisions when handling sexual assault. SAFE Alliance, an Austin organization that provides sexual assault advocacy, works with St. Edward’s administration to provide feedback and consultation regarding sexual violence.

Students have two available processes to make a report: filing a complaint to the university directly or to the police.

“[Reporting to the university is] not the same investigation as the police,” Pinkenburg said Thursday. “We are looking for violations of the code of student conduct. Police look for if a law was broken.”

Students may file a complaint via the Student of Concern/Conduct Reporting Form or by contacting the Dean of Students office. The investigation procedure of the university differs from that of the police who interview witnesses, collect and process evidence and eventually present a case to the District Attorney — a process that is slower than a university investigation.

“When a survivor is considering what they want to do, considering a university investigation or a police investigation, our job is to respect what the survivor wants to do,” Kirkpatrick said Thursday. “Taking power away from a survivor a second time is not good.”

Resources on campus for students to feel safe include student-led organizations such as SafeWalk, which offers students a ride in a golf cart from anywhere around campus at night. SafeWalk has recently expanded its hours from 7p.m. to 11:30p.m.

Students may also visit the Health and Counseling Center. The HCC offers counseling sessions including groups such as the Survivors Circle that meets via Zoom. Students can also call the Hilltopper Healthline 24/7 for real-time help.