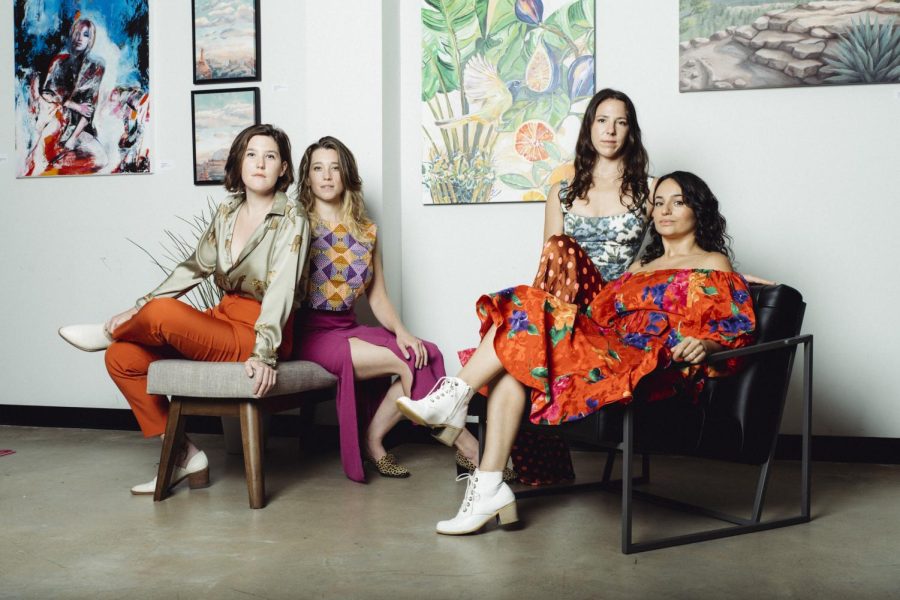 Based in Austin, Ley Line is a multilingual band inspired by folk and blues. The band consists of Emilie Basez, Madeleine Froncek, Kate Robberson and Lydia Froncek.

Multi-lingual folk band Ley Line fuses elements of the folk genre from many countries across the world in order to create a unique sound. The band plays songs in French, Spanish, English and Portuguese, often blending multiple languages and styles to create a tapestry of sound that crosses oceans and transcends borders. The band is based out of Austin and recently performed a show at 3ten on Nov. 26.

Ley Line is composed of four members who each bring their own styles and languages to the mix. All four women participate in the vocals, with Kate Robberson on ukulele, Emilie Basez on guitar, Lydia Froncek on percussion and her sister Madeleine Froncek on upright bass. The variety of instruments, languages and styles make no two songs quite the same come together.

Their most recent album “We Saw Blue,” released in 2020, was accompanied by a short film with their music spliced with footage of the travels the band took in Brazil as a group, which inspired the album. The album contains original songs which center around a theme of incorporating different cultures’ stories being told together.

Like their band name, which references a theory of interconnected landmarks across the world, “We Saw Blue” is about how the oceans once seen as a division between continents are actually a connection. To see blue is to see the oceans as connectors rather than dividers. The album has many songs which, while calming, have a lot of kinetic energy which incorporate musical techniques from American folk, indie, African folk to traditional Brazilian music, such as “Respiração” and “Slow Down.”

The original short film created by the band played before their show at 3ten Austin, and showcased many of the cultural exchanges between the band and the people they met on their recent trip to Brazil. While it was difficult to see the subtitles over the crowd, there was still a lot to gain from the film. Many of the scenes were of the band playing music with locals at schools and other events and did a lot to enrich the performance.

The show was a blast. Ley Line kept the energy up, bringing a lot of life to the crowd. What was amazing was the way they were able to engage the audience with songs in a variety of languages that many in the crowd likely did not speak.

The band also performed their most recent single “Postcards” at the 3ten show. “Postcards” is a bit of a departure from the songs off of “We Saw Blue” and feels more similar to their first album “Field Notes.” The single brings in new elements, which may be indicative of what their new releases might sound like.

Basez originally wrote the chords of “Postcards” as a jazz cover of a different song. However, when she returned to Austin from her trip to California, the band decided to use the chords with a poem that Robberson wrote about Basez after she left for Kenya for three months.

“She wrote that poem as a reflection of that feeling you get when people you love so dearly are off on a new adventure,” Basez said. “You don’t know where it will take them and you miss them, but you’re also celebrating this moment in time of a new chapter.”

Later, when the band wanted to add a multilingual element, Lydia Foncek wrote the bridge in French to mimic a love song but in a platonic fashion. These elements coming together are what makes the song and the band special.

Their recent show at 3ten Austin will be their last before their hiatus. Basez said they wanted to take time until the world comes out of the pandemic before they go back to touring;  however, they will still likely release singles during this time.