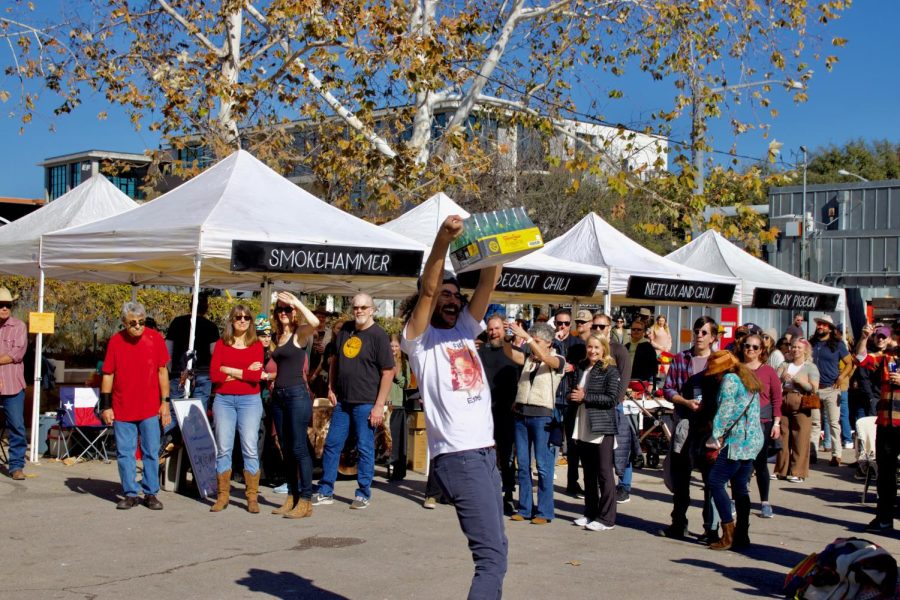 Lots of people showed up to attend the 15th annual Jo’s Chili Cook-Off. There were several flavors to choose from.

The smell of meat and spices was in the air on Feb. 6 as Jo’s began their 15th annual chili cook-off. They’ve hosted the event every winter since 2005, and hundreds of people showed up to celebrate the post-quarantine return.

There was no cost to enter, but chili tasting wristbands sold for $25. Anyone who bought a wristband was also given a ticket to vote for their favorite chili. However, the runner-up and grand prizes were awarded by judges. Jeff Hughes & Chaparral, as well as the Jo’s House Band, provided live music for the three hour event and quite a few people brought their best dance moves.

Around a dozen competitors came out to compete for first prize. There was Buckeye on the Bayou and Bubblin’ Red, who won 2020’s first place and crowd favorite awards respectively. But some, like Rodchester’s Red, had never attended the competition before. Anyone is allowed to compete so long as they pay the registration fee and follow the guidelines.

The sense of community was palpable. Several attendees brought their children or pets, and even those who didn’t come for the chili were welcomed by all. Despite the fact that I didn’t have a wristband, one of the contestants offered me a sample anyway. He told me that the competition was “all about Free Lunch. It’s all about feeding the people.”

The cook-off has always supported local non-profit groups that address hunger issues, and this year they chose to support Free Lunch.

“They just reached out to us,” Carrie Fussell, the director of meal support for Free Lunch, said when I asked how the partnership came to be. “Of course we said yes. Chili was actually one of the first meals we started serving. It’s just a warming, wholesome, filling food.”

But chili wasn’t the only thing brewing during the competition. About halfway through the cook-off, it was announced that there would be a “guacamole quick fire.” The contestants would only have about 15 minutes to cook up some guacamole using ingredients provided by HEB, which sponsored the cook-off this year. Once the time had elapsed, the judges decided that Farm to Chili Goals was the winner.

After another hour, it was time to decide who won. First up was crowd favorite, as decided by those who voted with their tickets. Bubblin’ Red won this award, and the announcer mentioned that they had won several times in the past. The judges awarded second place to Buckeye on the Bayou. With last cook-offs winners out of the running for the trophy, it was anyone’s game.

In a surprising upset, first place went to Rodchester’s Red. They received a wide array of prizes, from gift cards to a year’s supply of Topo Chico. And bragging rights, of course.

This event was incredibly fun, and it was nice to see the Austin community returning to some semblance of normalcy after the events of the last two years. If you have a killer chili recipe and a few good friends, try registering for next year’s competition! You may just take home the prized trophy pot.