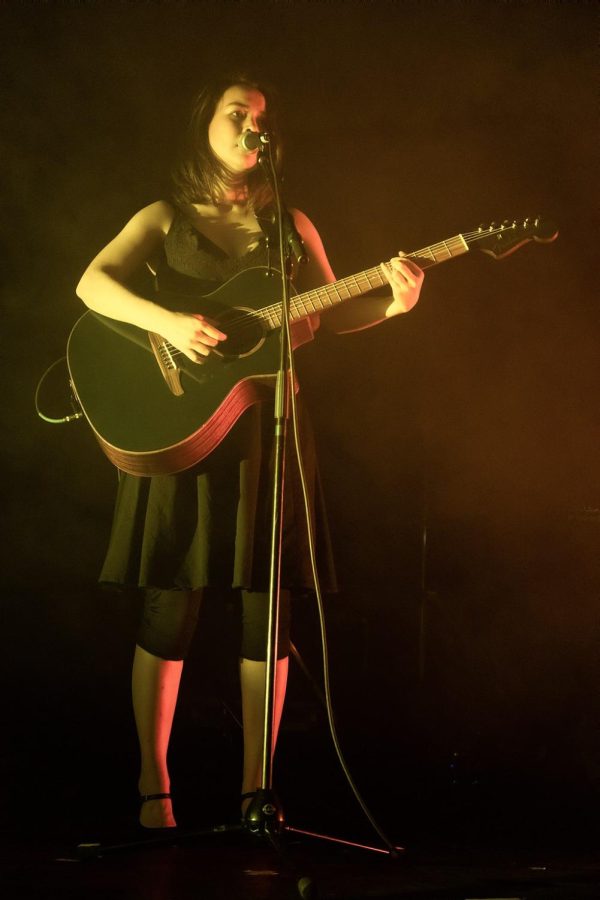 Mitski gave an impressive performance on Saturday at the ACL Live Moody Theater in Austin, Texas. Touring her sixth studio album, “Laurel Hell,” Mitski put on a performance that was both intimate and expressive for her audience.

The show had an impressive 22-song setlist, with music from her current and previous albums in the rotation.

Starting off with “Love Me More,” the indie star stood center stage with purple, blue and pink backlighting behind her while she sang. The only prop that joined her on stage was a single white door that sat behind her.

After “Should’ve Been Me,” Mitski performed fan favorites “Francis Forever,” “First Love/Late Spring” and “Me and My Husband” all of which are from previous albums. Mitski was engaged and danced expressively, moving her hands and arms with gestures that coincide with her lyrics.

During her next song, “Stay Soft,” a groovy synth-filled song with a darker sexual meaning, Mitski danced sensually, her fans howling during certain dance moves. She followed this performance with nine songs from her earlier albums.

Included in the set were, “Nobody,” “Your Best American Girl” and “I Bet on Losing Dogs,” which have all gone viral on TikTok. Throughout these songs, fans joined Mitski in singing. The sound of fans singing together in these moments felt like there was a shared understanding of the experiences that Mitski vocalizes.

She then sang “Working for the Knife,” the first single off of her newest album. It was also the last song she sang from “Laurel Hell.” The final three songs were “Goodbye, My Danish Sweetheart,” “Washing Machine Heart” and “A Pearl” from previous albums, her more upbeat songs of the night.

During her performance, Mitski reached out towards the audience, almost as if she was  reaching for a connection with them. At times, she sang softly and danced boldly, captivating the crowd’s attention.

Mitski ended the show and performed her encore swiftly, the indie-star closing the night off by thanking her fans with a heartfelt message.

This most recent tour and album marked a return to music for Mitski, who announced on the final night of her Be the Cowboy tour in 2019 that it would be her last show “indefinitely.” Mitski has become an indie star in these past few years, her vulnerability allowing her fans to connect with her through music.

In a now-deleted tweet thread, Mitski had asked  fans not to record entire live sets and to refrain from using flash during her performance. She wrote that she feels as if she’s not connected to her audience when they are watching her through a screen. The Austin show was one of the first shows after this announcement, which received many negative comments and criticisms.

Despite the negative comments, Mitski was expressive with her audience and extremely thankful for the opportunity to continue touring and making music. Her lyrics were intimate and vulnerable; they cut deep, which is exactly what makes her a star. Her performance was incredibly moving and emotional, making her show an unforgettable experience.