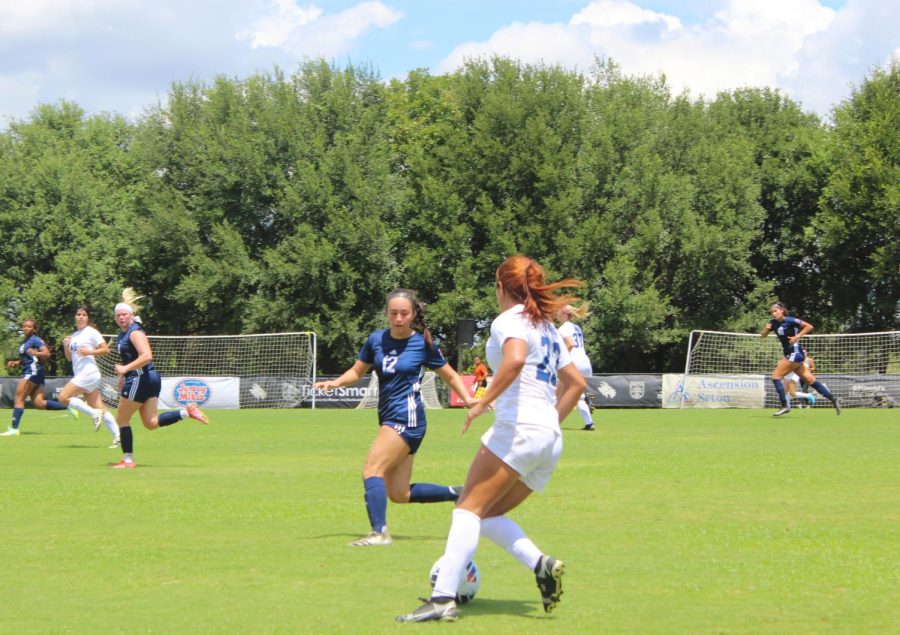 Hilltoppers, dressed in white, go against the Newman Jets in their first game of the season, taking home a massive win.

The first women’s soccer game of the season was today, Thursday, Aug. 25, at 1 p.m. on the Lewis-Chen Field against Newman University. Hilltoppers took home a 5-0 win after conquering the heat and the field.

Hilltoppers, dressed in white, continued to keep possession of the ball throughout most of the first half. The first goal was scored by Julia Spielmann six minutes into the game. St. Edward’s goalie Abby Carlson blocked several goal attempts made by Newman, and an eventual and unforeseen red card was called on Newman for serious foul play 27 minutes into the game. Player Katie Gay scored a penalty goal kick, making the score 2-0 for St. Ed’s.

Around 50 minutes into the game during the second period, Gay scored her second goal for the Hilltoppers, landing the ball in the top-left corner of the net. The heat continued to beat down on the team and fans as Newman players maintained their efforts. Spielmann scored her second goal with a penalty kick after a foul was called on Newman.

The final goal was made at the 78th minute by Izzy Siniscalchi with an assist from Tristyn Cabello and Ari Ramirez making the final score 5-0 Hilltoppers. No overtime was given.

Stay up to date with women’s soccer: game schedule