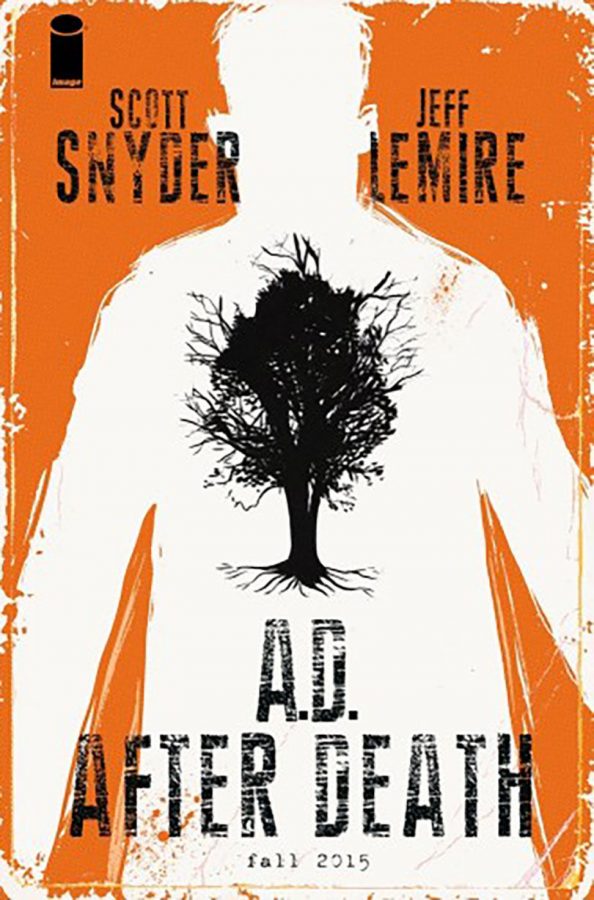 The comic, "A.D.: After Death," challenges the stigma that comic books are only entertainment for kids.

Comic books are a medium of storytelling and entertainment that carry a stigma that no other creative forms do. Even though the comic industry has grown beyond tights and capes, most people still see it as a means of entertaining children.

The comic, “A.D.: After Death,” challenges that frame of mind. The newest series was created by the all-star creative team of writer Scott Snyder and artist Jeff Lemire, both rising stars in the industry.

The comic, published by Image Comics, follows the inquiry of what happens after humanity finds a cure for death. The series is composed of three issues, which will be released over the course of three months beginning in November.

Unlike the composition of a standard comic book, “A.D.: After Death” uses a combination of prose writing, regular comic panels, and hand painted illustrations. Lemire personally paints each page, delivering images akin to something out of a picture book, or a scenic painting. However, these scenes serve more to add to the world that Snyder and Lemire are trying to create.

Both creators tend to focus on characters that drives the central story of the first issue. The main character, Jonah, shifts his narrating voice from a childhood story to his current life in the near future. Snyder imbeds a personality in Jonah that draws the reader in, helping to flesh out a fully formed character while also establishing a high concept science fiction world.

The non-linear narrative shifts between a prose and watercolor painted reflection from Jonah’s childhood to a sparse and intimate series of panels following what happens about eight-hundred years after the discovery of death’s cure. The use of both styles make it a little easier to follow the unconventional style of storytelling. Both the writer and author are giving their best to create an experience like no other in the printed format.

The use of a story from Jonah’s childhood makes him a relatable character and adds a dimension to his character that plays a greater role in the story later on. He recounts the habit of stealing, deriving from a deeply personal anecdote to a life habit of thieving. One memorable splash page (the use of both pages to illustrate one continuous image) reveal all of the many items that Jonah has stolen over the years, filling a large barn.

While “A.D.: After Death” serves as an in depth character study, it also ponders some intense and existential questions that have boggled humankind for a majority of its existence. The first issue bookends with this search for something more, beginning with a reflection of how a first memory affects life, and ending with the search for something more out in the world.

The book soars through both the amazing art and writing that come from the first team up Snyder and Lemire. “A.D.: After Death” is not made for children but rather serves to question fundamental questions of the human experience, while also provide an entertaining and captivating story of a man locked into a society where no one ever has to die.