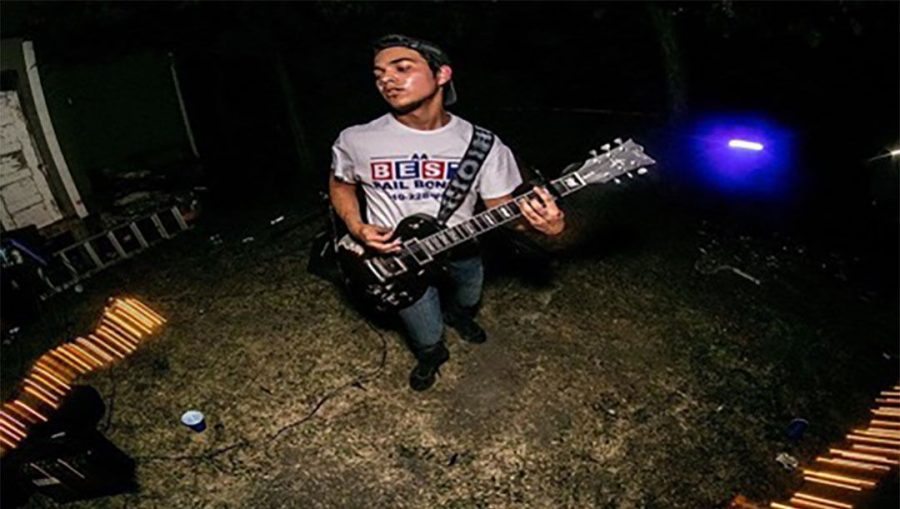 San Antonio native Matt San Martin knew St. Edward’s University would be the school for him after receiving a little push from his elder siblings.

“They both said they were really good schools,” San Martin said. “I thought combining a Holy Cross education with the Austin location would be a good fit for me.”

That’s when San Martin came across St. Edward’s. After a visit in the fall of 2015, he was set on making St. Edward’s the school for him.

“It’s like the goldilocks choice of school,” San Martin said.

San Martin is a communications major with a focus in journalism.

“I hope to someday write for a major news publication. None specifically, but I think Rolling Stone would be a good fit for me,” San Martin said.

Along with that, he is also a member of the Living Learning Community (LLC) in Hunt Hall.

“Our LLC centers on Social Justice,” San Martin said. “It’s really eye opening. It allows me to do things I probably wouldn’t have done.”

“It was the 50th anniversary for that march, and it was not only fun but very eye-opening,” San Martin said. “I was immersed into a community of human rights activists right from my arrival, all fighting for fair pay of Latino farm workers.”

The protest was a first-time experience for San Martin.

“Being in the center of a protest was a really interesting experience for me,” San Martin said. “There are real-life problems going on under the radar. I’m glad that I played a part in bringing these issues to light.”

Along with the his interest in social justice, San Martin’s involvement with music is another reason why he chose St. Edward’s.

“St. Ed’s is close to home, so I am able to maintain connection with my band, Identity Crisis, back in San Antonio,” San Martin said.

San Martin’s band just celebrated their one year anniversary on October 29th. In their first year of being together, the band has already recorded an Extended play (EP).

“We released an EP ‘I Wish I Knew Why’ back in early August,” San Martin said. “I would pre-classify our music genre as Indie-Punk.”

San Martin smirked at the idea of falling back on journalism as a backup plan to his music career.

“You know, in recent days, I’ve noticed that music and journalism go hand in hand in a weird sort of fashion,” San Martin said. “I feel that as a society we are longing to be more intimate with musicians and artists, and I believe it’s the job of a journalist to fill the gap between the audience and the performer.”

“It’s almost like journalists act as a middleman for big name groups, so they can connect with their audience,” San Martin said.

San Martin explained that he realized the connection between the two while making his way in the San Antonio music scene.

“Journalists have a lot of power in the music world and that’s something I’ve noticed first-hand, while gaining popularity with my band in the San Antonio community,” San Martin said.

“We’re called ‘Thank You,’ and we’re currently trying to record an EP/cassette because we think cassettes are pretty cool,” San Martin said.

“We have no working titles for our EP, but the music is good,” San Martin said. “It’s really sad stuff, way different from Identity Crisis. It’s a full-circle difference.”

As he does in San Antonio, San Martin plans to promote “Thank You” to help him and his counterpart gain popularity.

“We’re trying to play open-mic nights across town,” Martin said. “Just so we can get our sound out there.”