FACE-OFF: Which quarterback should start for the Dallas Cowboys? 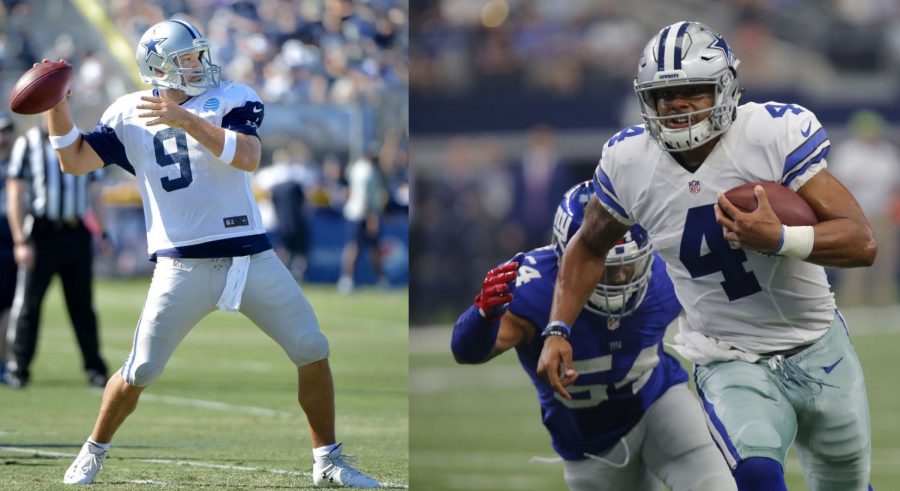 While Tony Romo is recovering from a fractured verterbra, Dak Prescott has led the Dallas Cowboys to a division-best 5-1 record. Both quarterbacks will be available by the end of October.

The Dallas Cowboys have found themselves in an unexpected situation. Eight weeks ago, veteran quarterback Tony Romo suffered a fractured vertebra during the preseason. In his absence, rookie Dak Prescott led the team to a division-best 5-1 record. Romo’s MRI shows he is on track to be game-ready by Week 8 or 9. Come the end of October, who will be the starting quarterback for the Dallas Cowboys?

Not only is Prescott more athletic and versatile than Romo, but Prescott started his NFL career with a bang. Consistent accuracy, rare mistakes and being able to stay composed under pressure are all key attributes that make up a promising quarterback. With unbelievable features from this rookie, who wouldn’t want Prescott as the face of their franchise? Starting a rusty and restricted Romo over Prescott will most likely result in yet another inevitable back injury while also disrupting the pace and style Prescott and the Dallas offense are already used to playing in.

Entering Week 6, Prescott was faced up against his biggest challenge yet: Aaron Rodgers and the Green Bay Packers. Rodgers is arguably one of the greatest quarterbacks the league has ever seen, which gave people many reasons to doubt Prescott’s performance. However, Prescott outperformed Rodgers by finishing with 247 yards, three touchdowns and one interception — his first career interception, in which Prescott broke Tom Brady’s record of starting an NFL career with the most pass attempts (176) without an interception. As of right now, Prescott has 1,486 passing yards ranking him higher than most veteran quarterbacks, placing himself in the company of some of the most elite quarterbacks to ever pick up a football.

Prescott isn’t running the show by himself though. Being accompanied by the league’s most effective offensive line, star players at every corner, and his partner in crime, Dallas running back Ezekiel Elliott, have all played a role in the outcome of many games and Prescott’s success. Although there are several players in the league with more experience than them, Elliott and Prescott prove that records are meant to be broken through hard-work and talent no matter the odds. Prescott is just a first-year player for this team, yet his enthusiasm, character and knowledge for the game serve as the glue that holds his teammates together.

Becoming one of the nation’s most outstanding college quarterbacks in 2014, while also breaking many school records, set the expectations for Prescott’s professional career quite high. Not only has Prescott brought his excellence with him to the NFL, but the young player has further impressed football fans by consistently proving that he is responsible enough to take on the role as the team leader which is enough to say that he deserves the starting position.

Even though both the general manager for the franchise and Prescott have both agreed that Romo is still the team’s number one quarterback, this may give the rookie a chance to take a step back and really learn ways he can further improve his own game. Prescott will also learn first-hand a few pointers from an experienced, veteran quarterback who has always somehow managed to conquer the negativity and criticism he is often associated with. That being said, when Romo gets hurt again (which is extremely likely) Prescott will rise to the occasion once again, proving to be the present and future this franchise rightfully deserves.

IT’S NOT DAK’S TIME YET

The Cowboys team officials, owner Jerry Jones and Prescott himself, have all said time and time again, “Tony is our No. 1 quarterback.” No matter the setback, Romo has proven to his fortitude over the past decade. Even though Romo’s health is questionable, people still want to see what happens when he takes the field. There will be memes; there will be haters. But what else is new? Romo first impressed the Cowboys in 2006 and has grown to become the franchise quarterback after three-time Super Bowl champion Troy Aikman retired in 2000.

It’s no secret the 36-year-old is pretty injury prone, but his stats lead him to be ranked among the most elite quarterbacks in the NFL. The quarterback spares that have filled in for Romo before Prescott, garnered an 1-11 record last year. Prescott may be hot now, but it could be temporary beginner’s luck. Colin Kaepernick, Robert Griffin III and Tim Tebow are all one-hit-wonders who made phenomenal starts but quickly burnt out, which proves it’s hard to have a successful, long-term quarterback career. Still, if Romo or Prescott get hurt at some point, the Cowboys still have the other one to fall back on.

At the end of the day, every team wants to win a Lombardi trophy. And Romo wants to be the team’s trusted leader during high-pressure situations. He’s had moments of disappointment, but his dismal two to four playoffs record have made him more resilient. Statistically speaking, the only thing separating Romo from legendary Cowboys quarterbacks is that Romo doesn’t have a championship ring. He deserves one more chance to prove his worth as a quarterback. Since Prescott has been playing so unexpectedly well these first few weeks, the Cowboys can afford to give Romo as much time as possible to recuperate and prepare for the late-season pressures. Additionally, the rookie has provided healthy computation which has probably motivated Romo to step up his game when he returns.

If the Cowboys are interested in trading the aging, aching quarterback, they need him out there on the field showing his worth to interested teams. Romo’s $119.5 million contract is thrugh 2019, so the Cowboys have invested too much into Romo to prematurely allow Prescott’s transition before getting their full value out of Romo. Jerry Jones has always been loyal to Romo, and the only reason he should part ways with his golden QB is for a good defensive trade.

Although Prescott represents the bright future of Dallas, he was a fourth-round draft pick with scouting doubts regarding accuracy and long-term durability. He’s exceeded expectations, but experience is worth more when it’s a high-stakes game near the playoffs. Healthy Romo held a 65 touchdown/19 interception differential from 2013-2014, second only to Peyton Manning. Manning was able to defy age and injuries to help the Denver Broncos to a Super Bowl victory in February. Although the Cowboys don’t have the defensive talent the Broncos did, they too will have experience at top of their command with Romo as their starter.