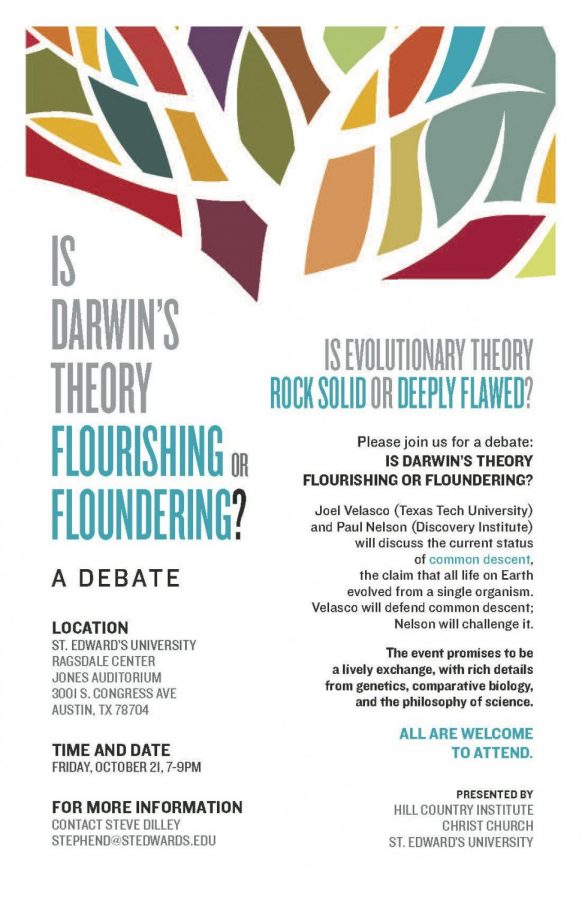 Some science professors voiced objections to the use of words in a flyer promoting a debate over evolution on Friday.

The School of Natural Sciences raised concerns this week about an on-campus event: “Is Darwin’s theory flourishing or floundering? A debate,” set to take place Friday.

Organized by Stephen Dilley, associate professor of philosophy, the event will host guest speakers Joel Velasco of Texas Tech University and Paul Nelson of the Discovery Institute, a Seattle non-profit public policy think tank known for its advocacy of the theory of Intelligent Design.

That theory “holds that certain features of the universe and of living things are best explained by an intelligent cause, not an undirected process such as natural selection,” according to the group’s website.

Both men are philosophers of biology who widely discuss the current status of common descent, or “the view that all of life on Earth descended from a single organism that lived long ago,” Dilley said.

Nearly a dozen professors from the School of Natural Sciences, including Dean Gary Morris, signed a letter to the editor to Hilltop Views (in this week’s Viewpoints section) summarizing their objections to the debate.

For the scientific campus community, the problem is not with the event’s coordination, but, rather, the characterization of Darwin’s theory of evolution as something meriting debate.

“The issue is not the organization of the debate. It’s that the debate itself presupposes that there’s a question that needs to be answered,” Professor of Chemistry Eamonn Healy said. “Scientifically, there is no debate.”

Although the headlines on the flyer suggest otherwise (one of them reads “Is evolutionary theory rock solid or deeply flawed?”) Dilley said that the debate will not be about the theory of evolution in its entirety, but specifically about the “common ancestry, the view that all of life on Earth descended from a single organism that lived long ago.”

Velasco will defend common descent, and Nelson will challenge it according to the event flyer.

“Both will draw upon evidence from articles published in peer-reviewed science journals to make their respective cases,” Dilley said in an e-mail to Hilltop Views. “Thus, the debate will focus on a scientific theory [common ancestry] in light of scientific evidence from appropriate journals.”

Still, Bill Quinn, professor of biology, thinks that the topic would be “best debated” by scientists and logicians.

“There is concern that there is some suggestion about whether there is a debate in scientific circles about the soundness of evolutionary theory,” Quinn said. “There is none.”

“It doesn’t mean people can’t have a discussion about it. Two philosophers might get together and have a public forum, a very useful public forum, in which they’re talking about human origins. I think that’d be fun to attend,” Quinn said. “It’s unfortunate that it’s cast in the light of Darwinian evolution so boldly.”

Dilley acknowledges that Nelson’s viewpoint is the minority, and he welcomes the controversy.

“Currently, common ancestry is by far the dominant view among biologists. But a minority has raised concerns,” Dilley said. “In my opinion, minority points of view can be quite valuable. What would our academic curriculum be without them?”

He pointed out that even Darwin’s theory was “far outside the mainstream view” for his time when Darwin’s most notable work, “On the Origin of Species,” was published in 1859.

“Imagine if we did that at the university — if we didn’t engage minority points of view. Our perspective would be impoverished,” Dilley said.

The Rev. Lou Brusatti, associate professor of religious and theological studies, said that he thought the contention over Dilley’s event was a matter of differing perspectives.

In response to the debate’s flyer, Brusatti cited the Catholic Church’s acceptance of evolution as a valid theory and said, “the bottom line is that I think it’s important to have conversations like this.”

Quinn said that a campus conversation about common descent can be a very progressive thing.

In the same vein, Healy said, “This is a question of ideas, pure and simple. With any great idea comes great debate.”

Dilley said he is excited to see what Velasco and Nelson have to say and is optimistic about the outcome of the debate.

“At a time when civil discourse in American culture (and especially politics) has fallen on hard times, I love that St. Ed’s embraces both passion and civility,” Dilley said.

“Dr. Velasco and Dr. Nelson will do a wonderful job of embodying these virtues. The debate will be erudite, cordial and lively.”

Though Healy, like others in his department, disagree with the event’s stated premise, he sees it as an opportunity to call attention to an important discussion that is not exclusive to St. Edward’s University.

“This is not the only institution that encounters debates of this kind regarding evolutionary theory,” Healy said. “The soul of the academic enterprise is disputation. Ideas are there to be discussed and analyzed. Only good can come from that.”

The discussion will take place in Jones Auditorium in the Ragsdale Center, Oct. 21 from 7-9 p.m.