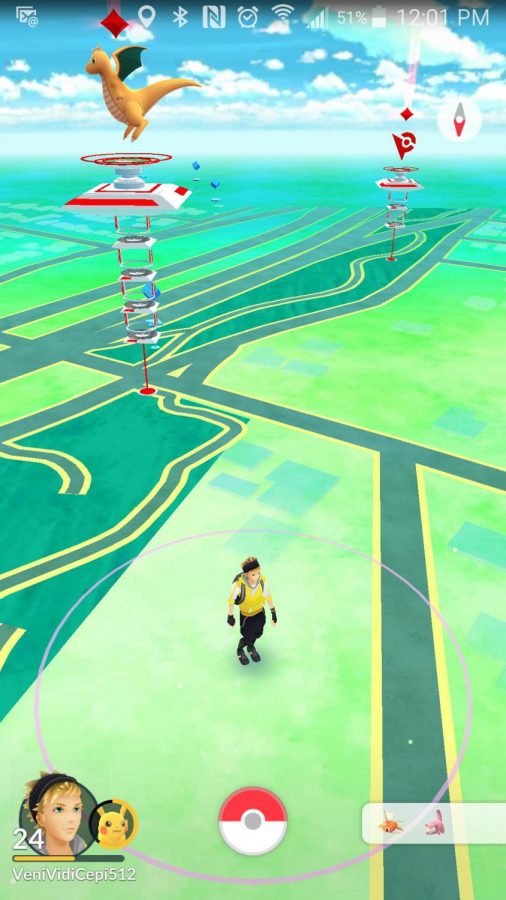 Love it or hate it, “Pokémon Go” held a 74-day streak as #1 on iTunes and Google Play stores, according to the Wall Street Journal. . Gym battles and collecting candies have given players the opportunity to explore the world around them like never before.

This free app is an augmented reality game created by Niantic for iOS, Android and Apple Watch devices. When the location-based game first became available this past July, it was no surprise to see Poké-fanatics roaming the streets for Pokémon immediately upon release.

The game allows players to create their own character, or trainer, in order to locate, capture, battle and train virtual characters. The virtual characters, or Pokémon, can be remembered from the beloved trading card game of the same name.

In the beginning, Pokémon trainers go out into the public to find and train Pokémon so the creatures can evolve and eventually battle. The more a trainer explores, the more Pokémon they can catch.

As the Pokémon trainer levels up, they eventually have the choice to join one of three teams, Instinct, Mystic or Valor. When the trainer picks their affiliation, they must go out to defend their team in battle and/or train in gyms located across the map.

The trainers must walk a certain distance in order to unlock more elements of the game. These elements include hatching eggs which lead to new Pokémon and collecting specific “candies” for certain Pokémon.

The GPS feature of the game makes it innovative and different from other games and apps. The game forces its users to get outside and explore. While the main goal is to catch Pokémon, hatch eggs, collect candies and battle in gyms, players see the world around them a bit more.

Psychologist John M. Grohol reports in PsychCentral that the game helps those with anxiety and depression. “Users are taking to social media to report an unexpected improvement in their depression and anxiety as a result of playing the game,” Grohol said.

The game is helping those struggling with these mental health issues by getting them to interact more socially. The exercise required to play the game is another factor in relieving depression and anxiety.

All in all, the app is changing the way we look at mobile gaming. “Pokémon Go” demolishes boundaries in a way never seen before.