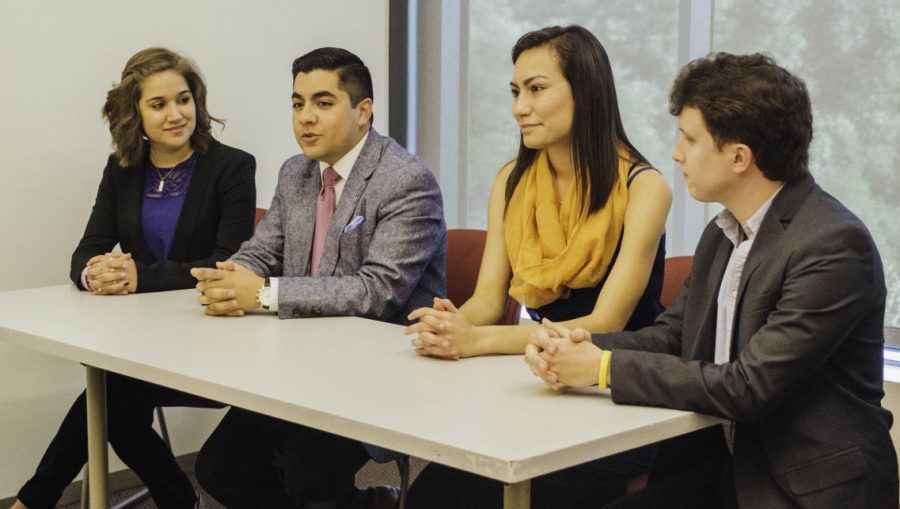 The presidential and vice presidential candidates Jamie Cardenas, left, Carlos Martinez, Anna Lopez and Ben Griffith sat down for an interview with Hilltop Views on April 6.

The two tickets for the executive offices both echoed similar ideas of wanting a more open and accessible student government, however, both tickets had different plans on achieving transparency and accessibility.

The senatorial candidates who were previously senators and are seeking re-election made it a point to highlight their achievements and the bills they have successfully passed.

Sen. Greg Reck talked about his meal plan transfer bill which went into effect April 1, allowing students to transfer and receive meal plan money from each other. The new senatorial candidates pitched ideas for changes they would make when they are elected as senators.

Sens. Carlos Martinez, a vice presidential candidate, and Andrea Ojeda both presented the referendums on the ballot this year. Martinez explained that a committee is being formed to decide on the details of the Green Fund.

He says that the referendum is only to gauge student opinion. If students are interested then they will move on with the plans. Ojeda echoed a similar sentiment about the Smoke Tobacco Free Campus referendum. When audience members asked questions about the details of the policy, she reminded them that there is no policy in place yet and the details will be decided once students have voted.

Current SGA Vice President Jonathan Edwards was the MC for the event. Throughout the event, Election’s Commissioner Faith Castillo and SGA president Jonathan Cruz urged attendees to write their questions on a piece of paper and submit it.

Edwards posed those questions in addition to questions sent in via Twitter and live audience questions. While there was speculation from attendees about their questions not being used, Edwards says it would not have been possible to ask every single question.

“There were only a few that weren’t asked due to time constraints,” Edwards said. “Which is why we had a section for audience only questions.”

In their answering the questions, both tickets claim to want a transparent and accessible student government. They each posed different approaches to creating the transparency.

Lopez and Griffith proposed a Student Peer Judicial Court that will do more than just handle parking citations.

“We want to give the students a voice in student concerns,” Lopez said. “So if a student were to break the student code of conduct, they would have to go through this court first before it goes to the Dean of Students.”

They also propose more tailgating for sporting events as a way to get students more involved and increase school spirit. In addition, they plan on collaborating with different student organizations as a way to better understand the needs of students.

Cardenas and Martinez are pledging to implement a commuter lounge for commuter students to hangout between classes or club meetings. Earlier this week, they introduced the idea to the student body through a video on their campaign website.

They are also looking to create a more vibrant nightlife and weekend scene on campus as a way to keep students connected.

Martinez echoed Ojeda on the importance of gauging student opinion about the Green Fund referendum. He admits that with regards to sustainability, all of their attention is on the Green Fund.

“To be quite frank, all of our eggs are in that basket right now,”Martinez said. “Because I think it starts with that first step. The Green Fund is the first step in seeing if this university is committed to sustainability.”

Cardenas says her and Martinez have already begun discussion with the University Police Department to implement the use of the blue call boxes around campus. She says this is the start of her mission to creating a safer campus.

While both parties were at a consensus about the issues facing the student body and SGA, disagreement came when the candidates were prompted to question their competition.

Cardenas pointed out all of Lopez’s involvements noting that in addition to being a Hilltop Mentor and a member of Hilltop Hospitality, she also holds an on campus job with the office of Career and Professional Development.

“You also joke that you don’t sleep very much,” Cardenas said.

She pointed to what she saw as “a problem with the previous administration” being a lack of commitment and asked Lopez how she would juggle all of her engagements and still stay committed to her office as president.

“I’ll do it how I’ve always done,” Lopez responded.

Lopez said that she has already made the decision to give up all of her other leadership commitments with the exception of Hilltop Hospitality and Hilltop Mentors. She also pointed out that she will only be taking 12 hours of class and that her work with the office of Career and Professional Development has been reduced from 15 hours to 10 hours.