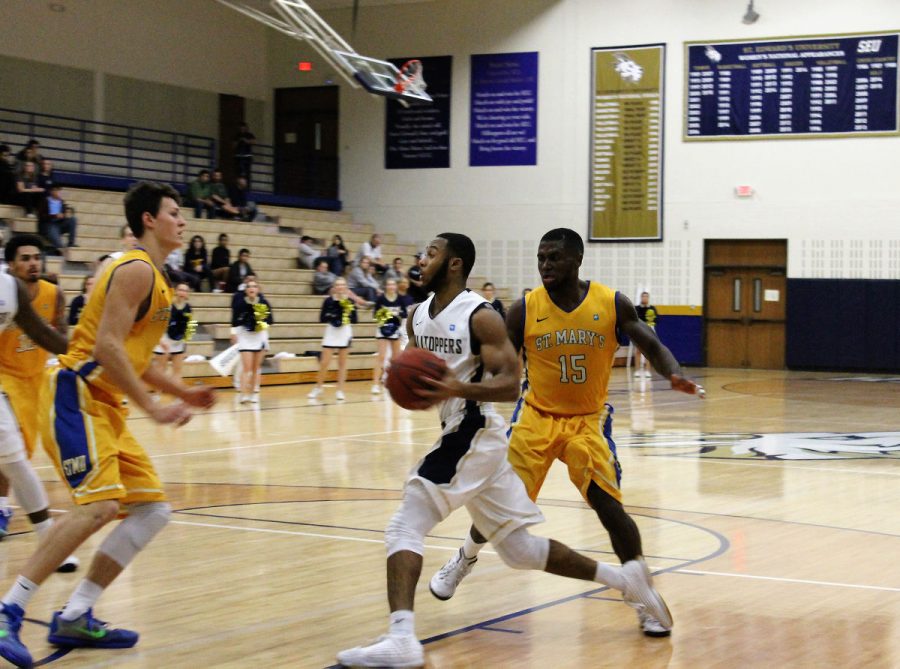 Burton was named the Heartland Conference Player of the Week in December 2015.

“I knew I was getting close … but I didn’t want to make it a big deal in my head before the game, because I knew we needed to win the game,” Burton says. “It wasn’t just about me.”

The game ended up coming down to the wire, as St. Edward’s won the Battle of the Saints matchup 69-65.

“Even though I have coached him for three years, he still amazes me with his finishes around the rim,” SEU Men’s Basketball Head Coach Andre Cook says. “He is always about the team first, and winning is the only stat that matters to him.”

Afterwards, his teammates were very supportive, congratulating him, and encouraging him to continue being consistent.

“Our team is really like a family. When we see one person doing good, everybody just supports one another, and we’re happy for one another whenever we achieve something like that,” Burton said.

Eight hours away from the bright lights of New York City, there wasn’t much to do but play ball – or take a walk across the Canadian border, Burton says.

When deciding which college to play for, Burton visited St. Edward’s, appreciating the sunshine of the South, the athletic department’s warm greeting and the fact that he could be closer to his father who lives in Houston.

Once he committed to St. Edward’s, he was assigned jersey number 25.

The jersey number is retired at Niagara Falls High School, following the death of promising basketball player Miguel Respress, who collapsed after a summer basketball tournament in 2005. Respress was a family friend, so in wearing No. 25, Burton feels he’s playing for two.

Although accustomed to playing as a guard, he earned a lot of minutes and points his freshman year playing as the point guard when starter Frank Mgbolu was injured. Burton says this time at point really helped him grow as a player.

Cook describes Burton as a very quiet person who lets his plays on the court speak for himself.

“He has a good heart and he would be willing to help anyone,” Cook says. “He doesn’t like to be singled out for praise, as he just wants it to be about the team.”

As a sophomore last season, Burton and the team reached the Heartland Conference Championship, losing to St. Mary’s in another close game. This 63-60 loss prevented them from reaching the NCAA Tournament.

“Hopefully, I’ll get better at it,” Burton says. “I try to take what I see from Frank,” the senior captain who corrals everybody on the court and is the go-to problem-solver.

Burton credits the veteran players for reliability, but also the sophomore class for their developments this season.

Despite his introverted, laid-back demeanor, Burton has had several highlighting moments in his career so far.

“Players like Ramir don’t show up at St. Edward’s regularly. There isn’t a Division II school in the country that wouldn’t want him,” Cook says.

“I am lucky that he is here with us and I get to coach him for the rest of this year and next,” Cook says.

The Hilltoppers are presently 14-6 overall, and 7-5 in conference standings. With several teams tied in the  standings, the team’s next home game on Thursday against Texas-Permian Basin will be critical.

“We started out better last year in conference than this year, but I feel this win that we just got against Fort Smith [on Jan. 30] will help us get it going,” Burton says.

Regarding his future, Burton hopes to be another basketball player from Niagara Falls fortunate enough to play professionally overseas.