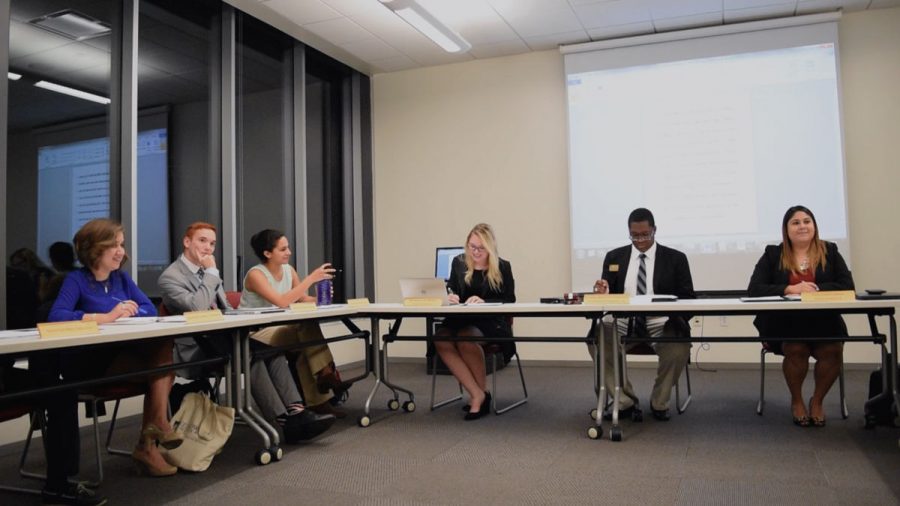 Sens. Dominick Namis and Jessica Guajardo co-authored a proposal for solar-powered charging stations to be set up outside of Moody Hall.

Namis estimated the cost would be over $2,000 for one station, and plans to procure two with the help of Students for Sustainability.

The bill was tabled and could be brought up next meeting.

Sen. Greg Reck proposed legislation that would allow students to pay an extra fee in their tuition in exchange for receiving bus access for one year.

Reck was unsure of the financial implications for the university or students, but the idea is up for discussion in the coming weeks.

They estimated that each banner would cost around $150 to $200 and the total cost of all four banners will not exceed $800. The bill passed.

The association approved Castillo’s re-write of SGA’s election codes to establish a longer campaign time and clarify a few murky points in the document, including a specification that only St. Edward’s students may run for election.

As previously reported, Castillo and Griffith wrote and passed a bill to abolish the association’s accountability codes.

SGA Advisor Carey Mays announced that SGA would be getting a new website soon, where all the meeting minutes, agendas, resolutions and other relevant information would be posted.

“All of those things will be linked to the website for the public to view. I’ve asked our communications director, our secretary and our VP and our president to be the ones to fuel those things,” Mays said.

He warned members to be careful of what they name their resolutions now that anyone will be able to access them.

“We’ve had this tradition of funky names for titles of resolutions only because we read them,” Mays said. “I think you ought to really look at the titles of your legislation because your name is going to be on it.”

Referring to Reck’s bill about bus passes for students entitled “Ultra Light-Beam,” a song by Kanye West, Mays said, “When someone such as Hilltop Views wants to look at legislation, they’re gonna be like, ‘what the heck does ultra light-beam mean?’ What does Kanye have to do with SGA right now?”