Investing for Our Future 2.0 to eliminate inefficient money uses quickly 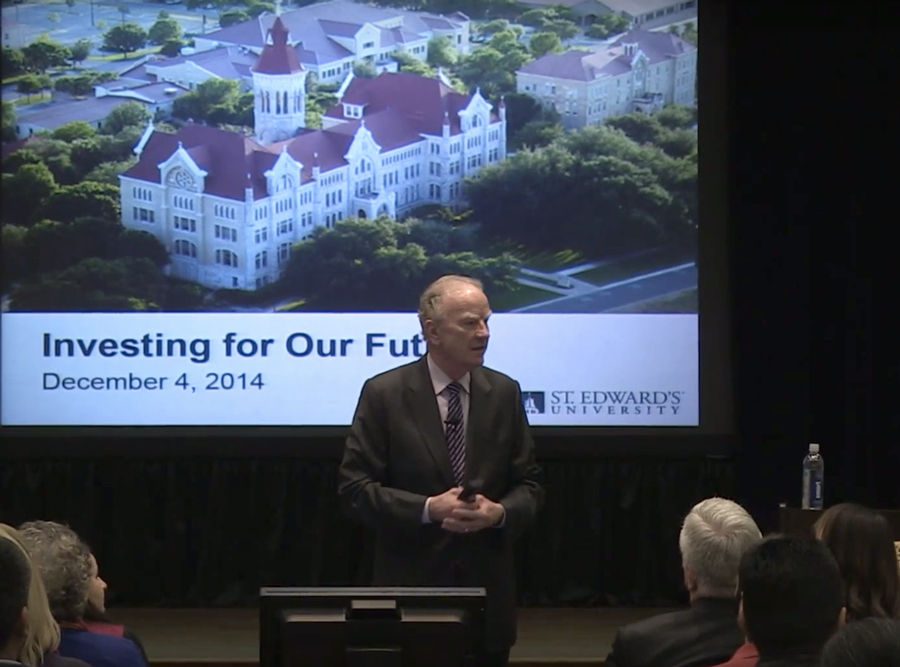 President George E. Martin gave a speech on Dec. 4, announcing the Investing for Our Future campaign.

In December of 2014, St. Edward’s University President, George E. Martin, presented Investing for Our Future, a plan to look at current expenditures and their relevance and efficiency at the school.

The plan’s focus is on the “transparent process of evaluation, reallocation and innovation” according to the university’s website.

During the process, over 100 members of the St. Edward’s community participated. IFOF is headed by the Executive Sponsorship team, which is co-chaired by President of the Faculty Senate Russ Frohardt and Vice President of Financial Affairs Kim Kvaal. Nine other teams were created as a part of IFOF. Each team included a student representative.

The goal was to create a committee rather than rely on a single consultant to work on the school’s budget. By working as individual teams and narrowing down the ideas presented, the IFOF teams were able to eventually put together a list of 526 ideas.

The main reason for this plan was to work on “not cutting funds, [but] instead reassigning them” according to Martin at last years’ Town Hall meeting.

In the past 15 years, tuition rates of St. Edward’s students have increased 8-9 percent every year. Martin says we cannot continue to raise tuition rates and keep the numbers of students increasing.

“Based on the various outcomes, [IFOF] looks at both long term investment as well as immediate changes. There is something called ‘low hanging fruit’ which is processes, programs or inefficiencies that can be addressed immediately that were identified and acted upon quickly. The goal, as I understand it, was to look at long term solutions, and any ‘low hanging fruit’ was snatched up and dealt with along the way,” Andy Lemons, member of the Student Affairs team lead by Lisa Kirkpatrick, said.

“IFOF gave us all some insight into budget ideas and thought generation, and gave us a safe space to look at what we are doing and trying to do it better and more efficiently,” Lemons said.

Community involvement is key to this committee.

Drew Nichols, co-leader of the Marketing & Enrollment team, said last year at the Town Hall Meeting, “I’m excited for how many people have the opportunity to be involved.”

“[We] want to get the word out and communicate the message to the students,” Frohardt said.

On Sept. 23, a meeting was held by the Oversight Committee.

They discussed reopening last years’ virtual suggestion box, only this year they will rename it ‘comment box’ and it can be found on the university’s website.

“We want to give people a venue for providing feedback to the ongoing IFOF process, but that we are not soliciting ideas from the community, like we were during the first phase of the project.”

Frohardt said, referring to last years’ suggestion box where they asked for the community, those who weren’t on a team, to present their ideas.This year they simply want feedback on the program and its effect on the school.

At least 60 of last year’s’ ideas presented to Martin are already in effect for the current school year.

The report and more details are available on the university’s website.

This year IFOF is renamed IFOF 2.0 and the new goal is considering how to research things more thoroughly and decide whether they should be implemented, Frohardt said.