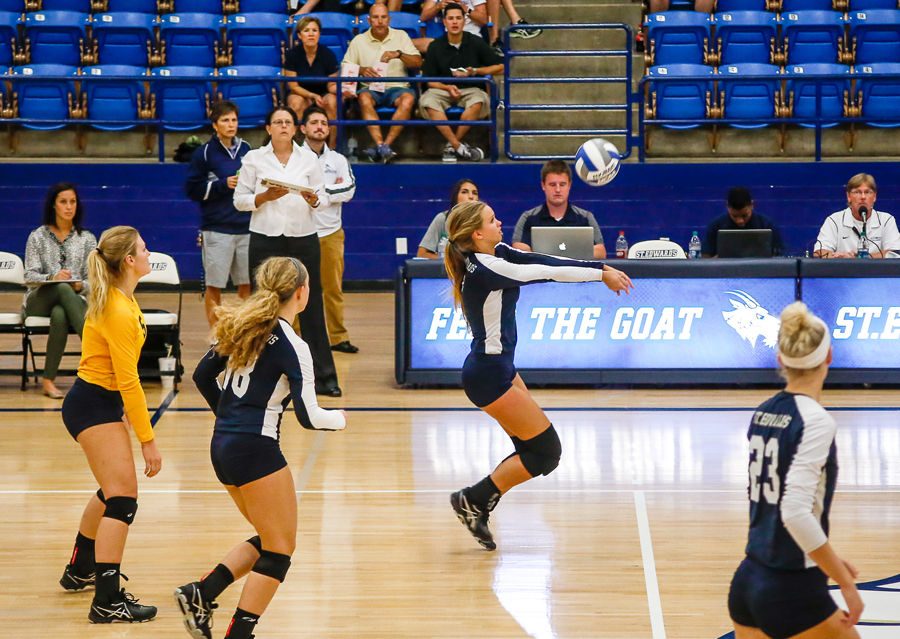 This academic year has witnessed several changes on campus, including a new head volleyball coach on the sidelines of the court.

SEU’s most recent victory was a close finish against the last place 2-8 St. Mary’s University on Sept 19.

“It’s very much a learning process, a growing process. Everyone is still getting used to a new staff, so whether they are upperclassmen, it doesn’t matter. It’s still their first year with me,” DeJute says. “So having to train them in a new system is a little bit different. In that regards, we’re still young, but we’ve taken a lot of steps in the process, in that learning curve.”

Prior to this season, DeJute has 16 years of collegiate coaching experience. The Ohio native has coached in Louisiana, Georgia and North Carolina. While in North Carolina, she led the NCAA Division II Belmont Abbey College team to their first conference championship in 2012.

Also, DeJute has a familiar face to help her transition.

Stephanie Holler is SEU’s new assistant coach who was first a player, then senior team captain, followed by the assistant coach title under DeJute at Belmont Abbey College.

Together, DeJute and Holler plan to have their team “play intense[ly] every time,” and have “a relentless pursuit of not only the ball, but also the win,” in hopes of returning to the Heartland Conference Tournament championship for the seventh consecutive year.

The 16-women team is a “very young team” comprised of eight upperclassmen and eight freshmen.

“We are running a faster offense which has taken some time to learn and get used to,” sophomore volleyball player Maty McClurg says. “However, I believe we are finally grasping the new concepts, and we will be difficult to beat when we are on our game.”

Both seniors have faced either illness or injury early into the season, which has forced DeJute to temporarily “replace the seniority” with juniors and a couple sophomores and freshmen.

In fact, several of the starters have not had a lot of playing time in their careers due to lengthy injuries last season.

“It’s been a matter of trying to figure out what rotation we can run with the personnel we have available,” DeJute says. At a recent game, DeJute even switched her freshman libero to an outside hitter position.

DeJute also mentioned the important advantage of a strong student section at home matches, referring to the large crowd in attendance and shut-out SEU victory at their home-opener on Sept. 3, which was a Blue and Gold Series game.

“I’m hoping that in time we can continue a solid following and base because it’s really a fun game to watch. It’s pretty exciting because it’s powerful and fast, but at the same time there’s strategy,” DeJute says.

One of the biggest match-ups of the season is an away game on Saturday against University of Arkansas-Fort Smith, who beat St. Edward’s in a close five-game series at the 2014 Heartland Conference Tournament championship match.

“The kids on the team, more than being fun to be around, and hardworking on the court, and intelligent in the classroom, they are just good people,” DeJute says. “I just hope they continue staying positive and continue working hard, and everything will fall in line.”

The next home match for the Hilltoppers is Oct. 2.