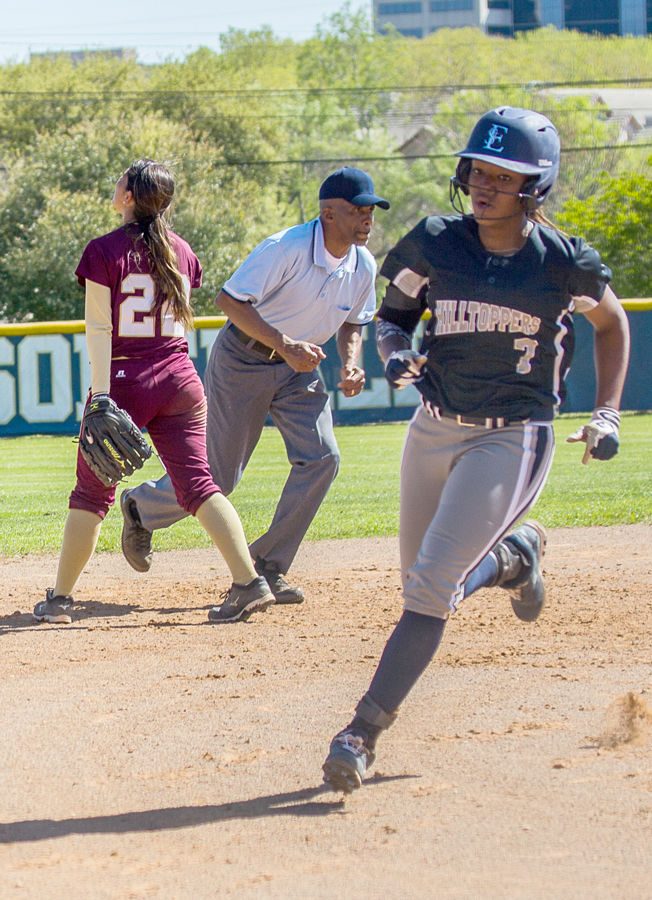 Off the field, Mayfield is majoring in criminology. After graduating from St. Edward’s, she plans on attending a police academy and becoming a police officer.

As a freshman, Mayfield had the second highest batting average on the team at .383 and, up until recently, was the team leader in hits and runs batted in (RBI’s). Defensively, she has played at second base, shortstop, and left field.

“Alex has a certain swagger about her style of play. She is a hard-nosed player who expects herself to perform at the highest level every game,” Head Coach Lindsay Gardner says. “As our leadoff batter, she gets on base over half the time.  As a coach, I couldn’t ask for much more than that!”

On March 28, Mayfield was hit by a pitch in a home game against Texas A&M International University, which resulted in a broken right hand.

Growing up in the small Texas town of Nacogdoches, her favorite athlete was Natasha Watley, the first African-American female to play on the USA Softball team in the 2004 Olympics.

“I loved watching her play softball, and I wanted to be like her when playing my game. She was a great inspiration to me growing up and imitating her was something I strived to do,” Mayfield said.

Mayfield discussed her personal batting mentality in saying, “I normally try to stay consistent in practice and always work hard. I try to have this mind set of every at bat being beneficial whether I get on base or not. Learn something from every at bat. That’s how I try to stay hot.”

“Off the field, she is a very caring person who would do anything for her teammates. She is a good student who succeeds in the life of being a student-athlete.  She takes responsibility for her own success and the success of her team,” Gardner adds.

Mayfield is majoring in criminology. After graduating from St. Edward’s, she plans on attending a police academy and becoming a police officer.

Now with left-handed hitter, Mayfield, out for about a month, the team will heavily rely on senior catcher Faith Roberts and freshman utility player Morgan Dufour to lead the offense. Other notable hitters/utility players that have performed well throughout the season include seniors Marisa Bogart and Caitie Carney, along with junior Cydney Ervin.

In the first series without Mayfield, senior pitcher Sarah Debrow struck out 13 batters in a 6-2 win over the University of Texas of the Permian Basin on Friday afternoon. “The 13 strikeouts give Debrow 661 strikeouts, which moves her past former Hilltopper Diana Cezeaux for first place,” according to the SEU Athletics website.

The victory also provided a Hilltopper sweep over UT-Permian Basin and improved the team’s current winning streak to four games.

Currently, the Hilltoppers are ranked No. 4 in the Heartland Conference (HC) with an overall record of 21-14 (9-6 HC).

“I am hoping for a speedy recovery, to be back by the time we play St. Mary’s (University),” Mayfield said.

Regarding her team’s season, Mayfield added, “I believe the team’s overall assessment would be a good performance. I believe, we as a team, learn something every game and we do everything we can to take steps forward to win the next.”