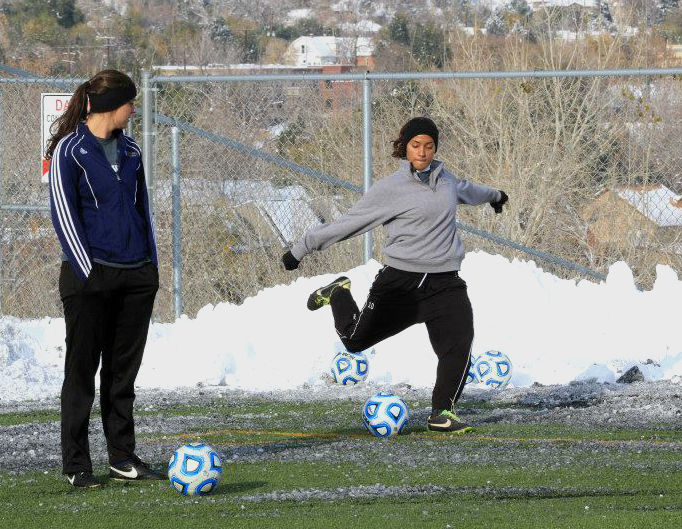 The women’s soccer season has come to an end after the team lost in the second round of the NCAA Division II playoffs to the No. 7 team in the country, Colorado School of Mines (16-1-4), by a score of 1-0.

“We played a great second half (Sunday) and outplayed the No. 1 team in the region,” Head Coach Nick Cowell said. “It was unfortunate that we went down 1-0 right before halftime on a goal that was actually offsides.”

Cowell is referring to a goal given up by the Hilltoppers with just 20 seconds left in the first half after a St. Edward’s University (15-5) foul. Colorado Mines was awarded a free kick where the Orediggers sent the ball into the box, and after several deflections, was kicked into the back of the net for a goal.

That would prove to be the difference maker in the game, even with St. Edward’s outshooting Colorado 13-6 in the game.

St. Edward’s goalkeeper, Lorrie Santoy, called the loss a tough one to swallow.

“The game was a heartbreaking loss,” she said. “I felt like we were the better team, but unfortunately we couldn’t come back from going down a goal in the first half.”

Just a couple days prior, on Nov. 14, St. Edward’s defeated Dallas Baptist University in the opening round by the score of 2-0. It was the Hilltoppers fourth time playing their conference rival, the first since defeating them in overtime for the Heartland Conference Championship 2-1, on Nov. 8.

Megan Anderson would score in the 35th minute of play, after launching a shot from 30-yards-out. The Hilltoppers picked up another goal in the 75th minute from Valencia Mobley to seal the win, and to advance to the next round in the tournament.

Defender Katie Donahue was proud of her team rising to the challenge of beating DBU three times in a row.

“I thought our offense connected the best it had all season,” she said. “Combined with our defense, there was no way we were losing that game.”

Cowell echoed Donahue in saying overall he is proud of how his team overcame hardships throughout the season.

“Overall we have to be satisfied with the season as a whole since we were sitting at 4-4 eight games into the season,” Cowell said. “We are proud of the way the team came together after suffering so many injuries early on.”

However, there is some disappointment for the Hilltoppers who had high expectations this year after reaching the Elite Eight round of the national tournament just last season. The team finished the 2013 season with a 18-1-3 record.

As for a shot at next year’s title, Cowell knows there is no guarantee of making a deeper run.

“We will just work hard to ensure that we have strong leadership from this year’s junior class and we will try and integrate next year’s freshman class as quickly as possible,” he said.