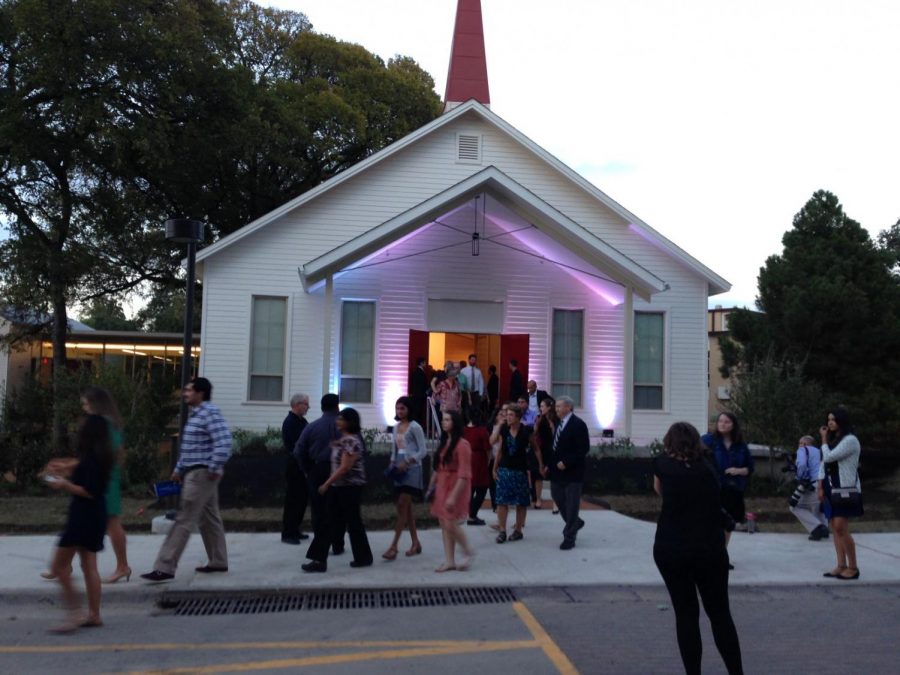 Religious events are often held around campus and a religious aspect is added to non-catholic events.

Our Lady Queen of Peace Chapel has changed tremendously during its 117 year life. It’s been used as an engineering shop, theater and even a shooting range and armory during World War II before becoming a chapel.

This year after months of construction, the chapel is embarking on the next phase of its life.

Students, faculty and administration packed the chapel for the dedication ceremony on Oct. 21, led by Austin Diocese Bishop Joe S.Vasquez.

“It’s been a long road,” St. Edward’s University President George E. Martin said. “We trusted in God, and we arrived at a place that I think we should be with buildings gardens that represent our Holy Cross Catholic sense of spirituality.”

The entire inside of the chapel was completely renovated.

The 100-year-old oak floors were salvaged. The walls and pews were replaced. They are made out of different types of wood from trees that had fallen down during storms.

The old pews were donated to a church in need in South Texas.

In addition to the chapel renovation, the Brother Stephen Walsh Campus Ministry Building was built along with a meditation garden, replacing Mang House.

The chapel was expected to be completed before the new school year began in August. The delay was caused by the maximum price for the project set by Flynn Construction, the original contractor, being greater than the budget, facilities Vice President Michael Peterson said.

Another problem occurred once construction began. Lead paint was found on the floors after the carpet was lifted. Construction was stopped to remove the lead paint causing the schedule to fall behind.

While constriction is complete, Campus Ministry’s move is not. It will finish moving into its new building by the end of the semester.

Assistant Director of Campus Ministry Brother Larry Atkinson is excited to move into the new complex.

“We missed being more in the center of campus. Less people dropped by,” he said. “It’s an essential part of who we are at St. Edward’s and should be a central location like the library.”

Daily mass will continue in St. Joseph Hall until the end of the semester.

The next mass in the new chapel will be Sunday at 10:30 a.m. and 9:00 p.m. Students can access the chapel at any time of the day by simply swiping their I.D.

“Students should see it as a place to come, to be welcomed, not only the chapel, but the meditation garden,” Atkinson said.

With so much time and effort put into the new complex, it seems many were ready for the dedication day.

“(It took) over 10 years” Martin said. “We started with different concepts. We ran into different problems.”

“It came together very nicely,” senior Harrison Hadland said. “I think it was one of the more controversial parts of renovation here on campus. It’s interesting to finally see it come together as a whole.”

After the completion of several major projects, including the Munday Library and new science building, it’s hard not to think about what could come next.

When asked about future projects, Martin gave a smile, but little detail.

“There will be other projects. We are actually discussing them,” he said.