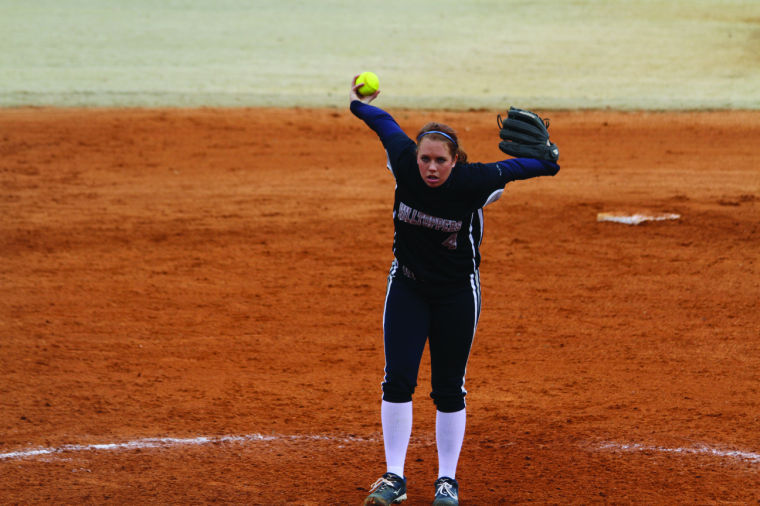 Debrow leads team in shutouts and has 127 strikeouts.

Even with numerous injuries plaguing the St. Edward’s Women’s softball team, they currently hold a 24-18 record, leaving them in a good position to make it to the postseason. This success is due in large part to the performance of junior pitcher Sarah Debrow. This season she is posting a 1.58 ERA, has won 11 games and was recently named St. Edward’s female player of the week. With Sarah Debrow’s performance and the return of many players to the field after recovering from injuries, the softball team looks ready to get back on track.

Debrow contributes a lot of the success of this year’s team to teamwork and the leadership displayed by upperclassmen players.

“Two seniors Lauren Brode and Kendall Lucas have really stepped up and they have helped lead our team by example,” Debrow said.

This commitment to teamwork, according to Debrow, is what has allowed the team to find success despite the struggles they have faced this season.

“Our team has been able to stay on track due to our ability to bounce back from adversity.”

The team practices 15-20 hours a week, and this dedication will hopefully bring them far in the postseason. Their strong defense and developing offense promises an interesting end to the season.

“Our team has a lot of potential. By taking a step-by-step method we should be able to win conference,” Debrow said.

Their team is working on developing their skills by continuing to attack at the plate and improve on offense.

“Our team goes through a throwing progression and a lot of reps,” she said.

By practicing extensively, particularly through fielding ground-balls and hitting in cages, the team is becoming more aggressive and is beginning to make a push towards the postseason.

The team will face St. Mary’s to end their season, and they look to win when it matters most. One of the ways this team gets ready to play is through rituals.

“We gather in a circle and give a prayer, start chants, and then toss the ball around,” Debrow said.

By preparing for each game and by getting pumped up, this team hopes to accomplish its main goal: a postseason stride. Their confidence and abilities will hopefully bring the St. Edwards Women’s softball team to a National Championship.