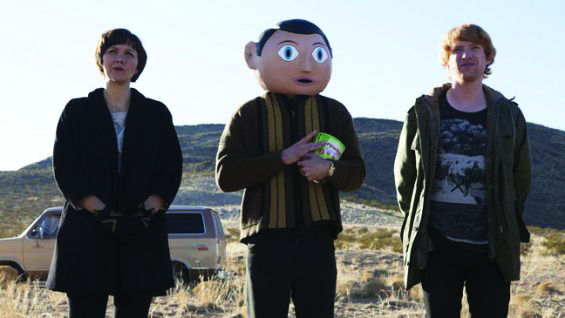 Michael Fassbender has played an android, a sex addict, a slave owner and even a mutant, but his weirdest and most interesting role to date may be the titular character in this year’s “Frank.”

Right away, the audience can tell something is not right with Frank, with the biggest clue being the giant plastic head that he wears every minute of every day. Unlikely keyboardist Jon cannot even catch him in the shower without the head on.

The story of “Frank” is somewhat inspired by the character of Frank Sidebottom, created by late comedian Chris Sievey. Jon Ronson, one of the writers of the film, was the keyboard player for Frank Sidebottom’s band and drew upon his real life experiences to write the movie with Peter Straughan.

The film is told largely from the perspective of Jon (Domhnall Gleeson) as he struggles to integrate himself into the eccentric band with the unpronounceable name “Soronprfbs” that he suddenly finds himself a part of. Much of the movie’s humor comes from Jon’s voiceovers about his experiences with the band, which are relayed through the conceit of him writing posts on his Tumblr, as well as the occasional tweet appearing on the screen.

As the film goes on and Jon begins to embrace the band’s lifestyle, his tweets grow more frequent and we see his follower count increase as the world starts to take interest in Soronprfbs. This lands the group a gig at SXSW just as they finish recording their debut album, and so they set off from Ireland to Austin.

This development greatly upsets Clara (a terrifying and intriguing Maggie Gyllenhaal), who for some reason does not want the band to become popular, which is basically all that Jon and Frank desire.

The movie does not try to be a fun, quirky comedy for its entire duration. Once Soronpfrbs reach America, the film takes a surprisingly dark turn. This tonal shift feels completely natural, however, and gives an emotional weight to all of the characters and their motivations that up until that point seemed confusing and unclear. The writers and director were wise to confront the issues, mental or otherwise, that their characters are facing rather than shy away from them.

Fassbender gives a fascinating performance as Frank despite the fact that he is only seen wearing a goofy plastic head the whole time. Fassbender has shown great versatility throughout his filmography, and it is relieving to see that even after success in huge blockbusters such as “X-Men: First Class” and “Prometheus” he is still willing to take unsettling, multifaceted roles in smaller indie films.

Gleeson, who has had smaller parts in movies like “True Grit” and the Harry Potter series, is continuing his transition to leading man with this film after starring in last year’s “About Time.” He brings a fantastic comedic presence to the role of Jon that makes the character feel real and relatable, given the odd situation he ends up in.

Overall, “Frank” is a hilarious yet heartbreaking film that tackles several issues like fame, mental illness and friendship, and it does so with surprising confidence.