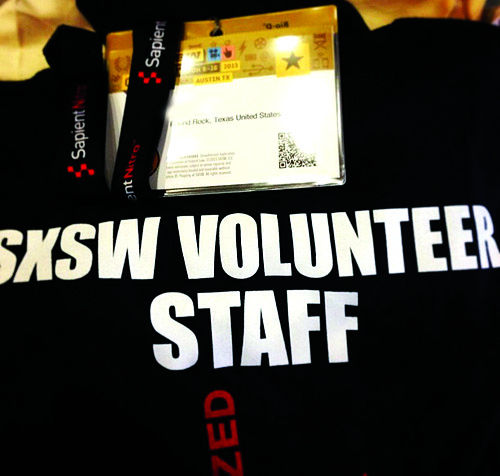 South by South West needs volunteers to run their 10-day festival and they will pay with perks. Depending on how long volunteers work, they can earn badges or wristbands allowing them priority entrance into the official SXSW events.

The first two volunteer calls were in January at the Austin Convention Center downtown, but there are two more opportunities to sign up.

Thousands show up for part one of orientation, where they choose which crews they will be working with and sign up for their schedules. Each person must choose between Conference crews or Production crews.

The difference between the two is Conference crew members work a variety of hours, so perks are dependent on the number of hours worked. Production crew members are required to work a set schedule for a specific crew, so it is shift-based for perks.

Sign-up is one of the most crucial steps to having a successful volunteership at SXSW.

“You’re going to want to get all your hours done before the festival you want to go to starts, which for me was music.”

Mike Murrad, who volunteered last year for the first time, said, “Knowing how early and where you want to show up to concerts plays a part in scheduling.”

Volunteers are able to sign up for shifts offered by various crews who are responsible for the behind-the-scenes action, like setting up the banners around the city or working the registration booth inside the headquarters at the Austin Convention Center, or working the door with the comedy crew at venues downtown.

“Everyone who participates in South By has to go through registration. So you’re going to meet musicians, actors, or interesting internationals,” Murrad said.

Murrad is signed up to work three different shifts for registration this coming year.

Volunteer gold badges will get volunteers into both the film and interactive fests. The music badge would normally cost $750, a steep price for college students. The volunteer system at the SXSW festival affords volunteers the ability to see a variety of live shows. Moreover, volunteers can gain priority access to music events put on by SXSW all week long.

Other perks include platinum badge for returning volunteers who work 80+ hours, or music wristbands for those who work 50-59 hours.

Volunteer Jesse Thomas said that he joined Conference crews because he is excited to learn about the festival, see good music and meet like-minded people.

“It’s a good opportunity to experience SXSW from a different point of view, to see the ins and outs, behind the scenes,” McClintock said.