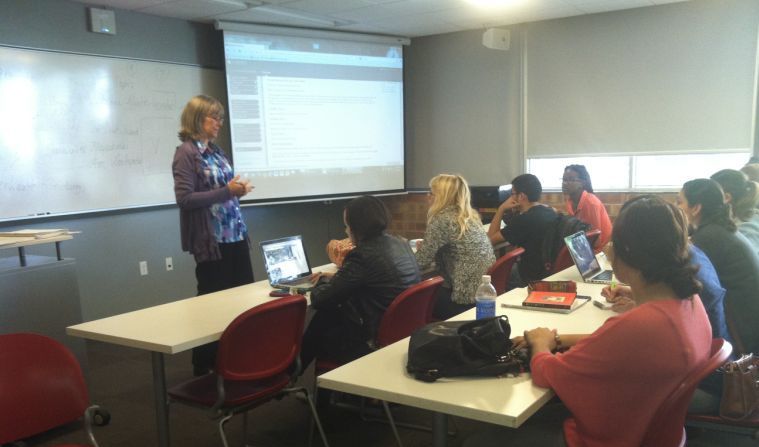 Adjunct Bev Van Note, has taught at the university off and on since 1999. Van Note teaches nine credits each semester, and she said the new six-hour cap will force her to find a new job.

St. Edward’s University is cutting the number of hours adjunct faculty can teach each semester. This is a change Vice President of Academic Affairs Mary Boyd said is consistent with the longstanding policy laid out in the Faculty Manual.

“The university takes all policies seriously and strives to appropriately enforce them all,” she told Hilltop Views about the change via email. She declined to meet for an interview.

According to the Faculty Manual, part-time or per-course term faculty “generally are not contracted to teach more than six credit hours per semester.” The policy had previously been interpreted as a guideline.

“There is no new policy or understanding that prohibits one year temporary faculty from being employed beyond five years,” she said.  “However, some schools have a practice of not continuing to extend contracts beyond five years or, in some cases, less than five years.”

The Austin American-Statesman published an article detailing a similar situation at Austin Community College on Nov. 25. The stated reason for ACC’s change in policy is the Affordable Care Act.

However Boyd said repeatedly that the university’s goal is to ensure that the faculty manual is being followed.

“The Affordable Care Act has had no impact,” she said.

Longtime St. Edward’s adjunct Bev Van Note, who has worked off and on for the university since 1999, said she will need to look elsewhere for work. Van Note has a doctorate degree in English with a specialization in renaissance literature from Texas A&M. She usually teaches three courses a semester, but in the spring she will be cut back to two Culf 1318: Literature & Human Experience courses.

Van Note said that she and many other adjuncts share the same sentiment, “A lot of us are considering other options entirely because we feel we have no choice. I will probably be forced to look for another job entirely, which is not my preference,” Van Note said. “It’s hard to offer your best as a teacher when you feel hopeless about your employment situation.”

Currently, the stipend for adjuncts is $3,500 per course. Once adjuncts have taught for 10 semesters, the stipend increases to $3,700. Van Note said that she works about 50 hours a week with her current course load of three courses a semester. This includes class time, office hours, class preparation and grading.

“The adjunct faculty here are often the face of St. Edward’s for our incoming freshman students because we are relied upon so heavily to teach first year writing courses, to teach within the freshman studies program, to teach cultural foundations courses. So many of our freshman see us as the face of the university,” Van Note said.

This semester 88 percent of Rhetoric and Composition I sections are taught by adjuncts.

According to Lynn Rudloff, director of first year writing, it is her understanding that the university will not be granting the School of Humanities another full time faculty member. She said that she has not calculated how many more adjuncts she will need to hire for fall 2014, but that she expects to have to hire a few more than normal.

Although humanities will have to hire and train a few more adjuncts, Rudloff said that it will not be a problem. Each year adjuncts do not return after the summer break and positions need to be filled.

“The new policy is not a major complication for me, but it is for them (adjuncts),” Rudloff said.

Amy Adams is an adjunct who left the corporate world and started teaching Rhetoric and Composition I and II at St. Edward’s in the fall of 2005. Adams said that she teaches for the fun of it, and she does not need to rely on the income from her position. Still, she said, others do need the money.

“I feel like adjuncts are under the radar,” Adams said.

Adams said that in the 9 years she has been teaching, she has only been observed once, and that she is only evaluated to her knowledge based on course evaluations. She finds this method disheartening because many students are fairly apathetic toward course evaluations.

Adams said that her students admit that they are “tired and hate doing these stupid things (evaluations).”

“Adjuncts are only paid to teach courses. Requiring them to participate in senate activities would exceed their contractual obligations,” Richard Kopec, president of the faculty senate, said.