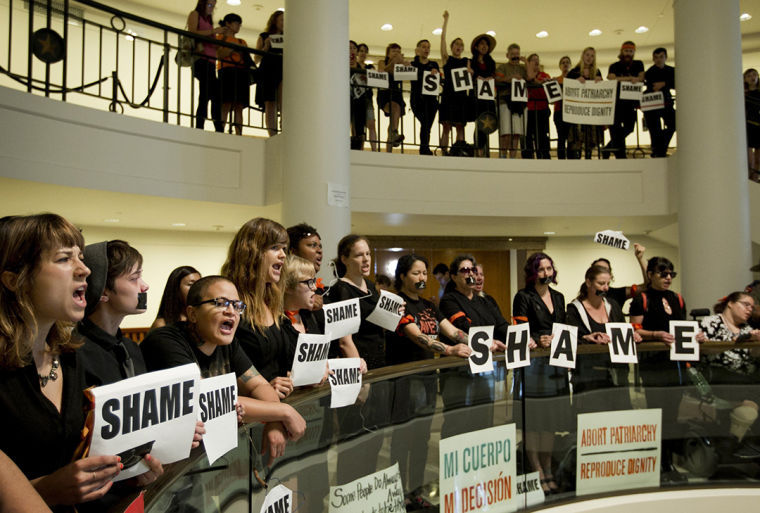 When Gov. Rick Perry called a special session this summer to pass a bill that would restrict doctors from performing abortions after 20 weeks and mandate all abortion clinics to have hospital-like emergency room standards, he and his Republican colleagues thought they had won the war over abortion against state Sen. Wendy Davis and her supporters. Perry however has just lost that fight because U.S. District Judge Lee Yeakel has ruled the law is unconstitutional, delaying implementation that was set to begin Tuesday Oct. 29.

This is a big win for all Texan women, but especially Davis who is running for governor. Although we attend a Catholic institution, which does not support abortion,  the rights of women should not be infringed upon.

Abortion is a choice that a woman should on our own—or with her partner — and her physician, and a male dominated state legislature should not be part of that choice.

The politicians behind the abortion law state that their interest is not only to protect mothers, but also “fetal life.” In the first place, these politicians are posed in the Texas legislature as paternal saviors with a patronizing agenda to save women. It is not hard to parse their reasoning. Their drive is ideological and removed from real life abortion situations.

To address abortion issues, it is necessary to consider the circumstances of the women who seek abortions. Davis stated in an opinion piece in the Washington Post that, “each year, about 25,000 American women… become pregnant through rape or incest,” A quick check on Politifact would reveal that the number of pregnancy caused by rape could be anywhere from 3,200 to 50,000. That figure stands for any given year.

Abortion is connected to a deeper problem of men’s violence against women. Although, pregnant women who seek abortions are not always victims of rape, we should consider the massive number of women who are raped each year and examine the position that Texas women are put in. If the law had been put into action, pregnant women who were victims of rape or incest would have been robbed of access to abortion, their dignity and their mental health. Suffice to say, politicians like Perry would not have been saving women, but condemning them to suffering.

It is better for women to have access to safe and legal abortions, instead of seeking the alternative of unsafe, “back alley” abortions that women faced many decades ago. Before the Supreme Court’s decision on Roe v. Wade, many women attempted abortions on themselves with a hanger or in an alley somewhere. Had this law not been struck down by a federal judge, this would have become the reality for women in Texas, who previously had access to safe abortions performed by a licensed physician.

No one wants to have an abortion, but the procedure does happen fairly often in Texas. The best way to prevent abortions from even occurring is to provide access to contraceptives. This way, people who are sexually active can avoid an unplanned pregnancy in the first place.

While Republican politicians across the country are taking aim at abortion and try to make it illegal, the Catholic Church has moved away from abortion and other social issues in an effort to bring more people, especially young adults, back to church. The GOP has lost the youth vote the past few elections because of their position on abortion and same-sex marriage. It is time for Republicans to scale back the rhetoric on social issues and focus on real problems that voters care about.

Attorney General Greg Abbott, who is running for governor, has appealed the judge’s decision.

Texan Republicans were jubilant when the bill passed, but now a federal judge has just slapped them with a big dosage of reality.

According to the Washington Post, “Wendy Davis couldn’t stop a Texas abortion law. But a federal court just did.”