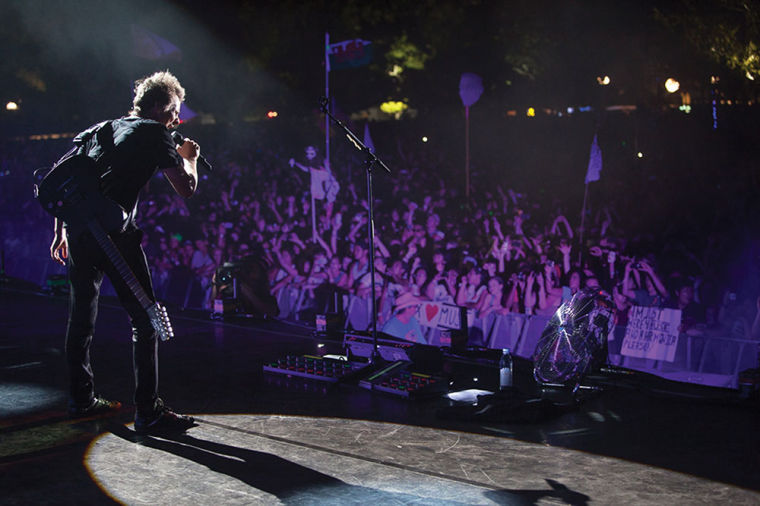 I have seen these English rockers headline ACL twice before (2007 and 2010), and from those shows, I knew I would be in for quality entertainment.

Muse took the stage a little after 8:30 p.m. on Friday, only to lose power within the first minute of “Supremacy.” After 25 minutes of eagerly waiting, front man Matthew Bellamy came on stage to explain that a generator had run out of oil as they started playing. Without further ado, the band began again, still as enthusiastic and fired up as they had been at their original start time.

With hits like “Supermassive Black Hole” and “Time is Running Out,” Muse met the crowd’s expectations of outstanding vocals and musical genius. Beyond the surface of a flashy light and laser show and galactic graphics accompanying their performance, there are so many elements that make Muse a steadfast headliner. Bellamy’s vocals astonished, as always, and made me wonder how something so beautifully high-pitched (and out of most men’s vocal range) could still have so much grace and control behind it. His talents are not limited, however, as he also contributed his rock god guitar skills while he played alongside bassist Christopher Wolstenholme.

As expected, “Madness” provided the most crowd participation, and Bellamy was sure to have fun with the song, engaging with the audience in his stage movements. Toward their 10 p.m. end time, they hit yet another technical snag as their last song “Survival” was cut short. While it was speculated that this was a direct result of them exceeding the 10 p.m. sound ordinance, they returned on stage for their encore version of “Knights of Cydonia,” which featured Ennio Morricone’s “Man with a Harmonica” intro. Overall, Muse delivered another entertaining and energetic ACL performance that is worth making a point to see.