Miley Cyrus incapable of championing the best of both worlds 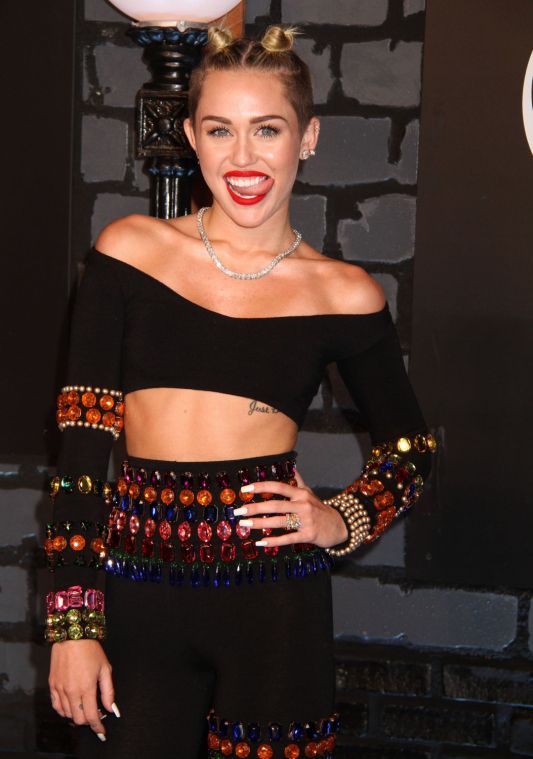 Sticking out her tongue has become one of Cyrus’ looks.

The MTV Video Music Awards were a hot mess.

Although, given the VMAs track record, we should not have expected much in regards to the class and respectability of the performers. After all, this is MTV we are talking about.

The show air lived on Aug. 25 and left us with plenty to talk about. However, there was only one name on everybody’s lips: Miley Cyrus.

Although she did not win a single award, she did manage to became one of the most talked about celebrities at the VMAs in under 6 minutes. Unfortunately, it was for all the wrong reasons.

Most of Cyrus’ critics have chastised her for the strong sexual nature of her performance, which included grinding on Robin Thicke, twerking all over the stage, stripping down to nude latex lingerie and rubbing a foam finger on her crotch — just to name a few.

Other critics slammed Cyrus for her thinly veiled drug references, which they found especially concerning given her fairly young legion of loyal fans.

However, none of that was as disturbing as the racist undertone of her performance.

What’s even worse is that the mainstream media took little notice of that, because it was too concerned with Hannah Montana asserting her sexuality on live television.

The sexually charged nature of Cyrus’ performance was actually rather unsurprising. Anyone who has followed Cyrus’ career lately knows that she is doing everything she can to throw off her innocent Disney starlet image.

While Cyrus’ avid twerking may have shocked some people, it was also unsurprising. After all, the internet is already full of videos of Cyrus twerking on stage at various concerts or at home just practicing.

While it is problematic that being overtly sexual is her way of proving she is no longer a child, it is her body and she can do what she wants. More importantly, this is not what should be concerning us.

Cyrus has said in interviews that she wants her next album to have a “black sound” and has expressed a desire to be “more urban.”

More over, “We Can’t Stop” was a rejected Rihanna song (a good choice on Rihanna’s part.)

It is clear from her performance that Cyrus’ understanding of black culture equates to hyper-sexuality, ratchetness, twerking and not much else beyond that. Her backup dancers, who were all black women, were essentially there to be her props. She even simulated anilingus on one of the women before slapping her “bubble butt” and dismissing her. She used this caricature of black culture as a way to further her career and image.

Her use of a group’s stereotype for her personal gain, with little thought about the implication of that action, borders dangerously close on exploitation.

While this mentality is not as overtly racist as shouting racial slurs, it is still steeped in racist ideals about what it means to be a black person and, more specifically, a black woman. This mentality speaks to the deeply internalized racist ideals that are still part of our society.

The problem with these internalized racist ideals is that they have become such an accepted part of our collective psyche that we no longer notice or question them. When we accept or ignore these ideals, we reinforce them, and thus keep racism alive.

This does not mean that Miley Cyrus is a mean, racist person. She is just a 20 year old who did something without thinking about the implications and ramifications of her actions.

It is normal for young people to make a mistake; it  trial and error we all use. However, we can not learn from our mistakes if we do not seriously think about what we did wrong, why it was wrong and how to keep from making the same mistake again.

Miley Cyrus’ performance at the VMAs gives us all something to seriously think about if we want to make progress with our race relations.