Gun control should be determined by mindful senate not NRA 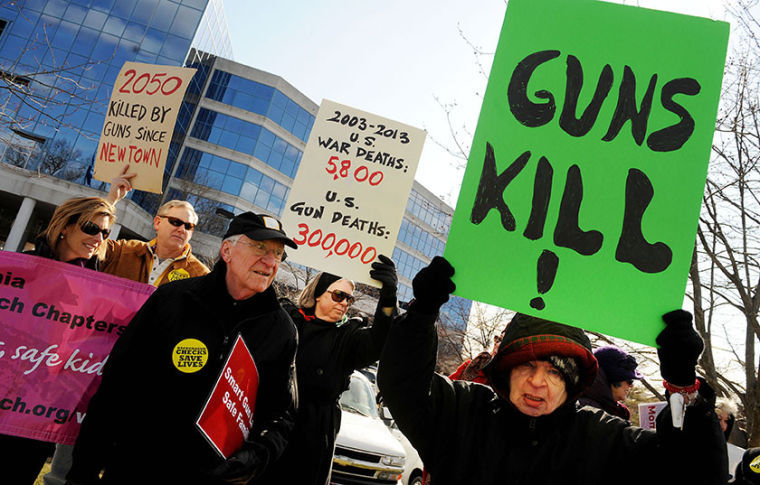 MomsRising holds a rally in front of the National Rifle Association (NRA) office, in support of common-sense gun regulations.

A few weeks ago the United States Senate finally started to work on a gun control bill. One key component of this bill was an amendment that would require a background check for every individual that would buy a gun—this amendment failed despite 90 percent of Americans supporting it.

The background check amendment failed to get the required 60 votes it needed, however, it did have 54 votes, a clear majority of the senate. Most of these votes came from Democrats with four coming Republicans including 2008 presidential candidate John McCain.

McCain said that he voted for this because he believed was right. This is the way that all senators should vote. Senators should not be slaves to groups like the National Rifle Association, they should be voting for what is right for the people of their respective state and the entire country.

If it means that a senator’s rating with a group drops so be it—it’s just a figure that does not mean anything. The only thing that matters is if a senator’s constituents approve of their job.

Sen. McCain also defended his 2008 opponent, President Barack Obama, when he said that the failure of the background checks amendment was a shameful day for Washington. Obama is right. The senate should be ashamed of itself, especially those who voted against this common sense idea.

These senators are a shame to every citizen in the country. They have failed to do their job of protecting their people. These senators did not vote from their heart or conscience, they voted the way the NRA wanted or to protect their job as senator.

Senators should not worry about whether or not they will win the next election, they should be worrying about the safety of every citizen in the United States.

One senator is already seeing bad side effects from voting no on the gun control bill. Republican Sen. Kelly Ayotte of New Hampshire has seen her approval rating plummet 15 points since the vote, according to Public Policy Polling. Ayotte was the only senator from New England to vote against the bill.

About 75 percent of New Hampshire voters support background checks, Ayotte failed to do what her people wanted. New Hampshire is very upset with their Republican senator with one newspaper running a headline for an editorial saying “If you want gun control, vote Ayotte out of office.”

If Americans want to see meaningful gun control implemented, they need to vote every single one of the senators who voted against this bill to get senators who truly represent their interests.