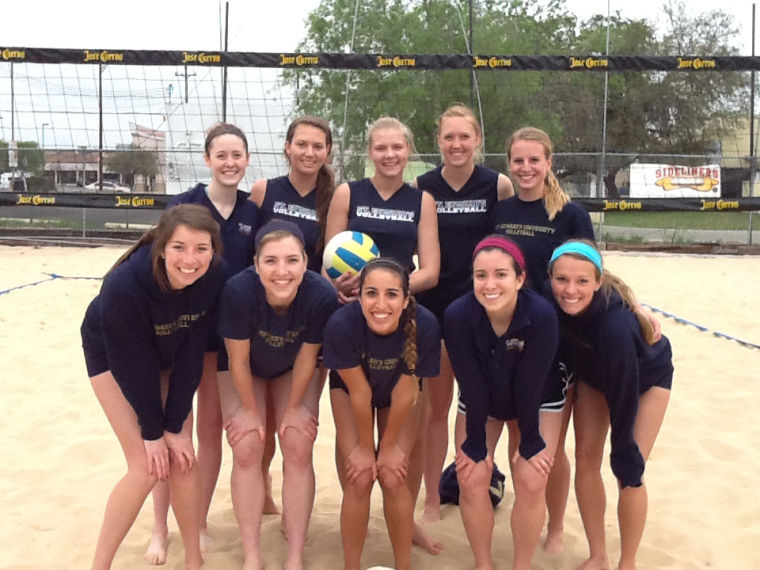 Five teams of two represented the Hilltoppers in a volleyball tournament in San Antonio.

“St. Mary’s and DBU were the toughest teams we played, mainly because they were athletic and smart with their shots on the court. Also, they are the two biggest rivals that we have in the conference,” said redshirt freshman Amy Jones.

Jones and her partner, Kendyll Severa, took sixth place in the tournament; Loren Kelly and Jessica Morales placed eighth; Heidi Oo and Rebecca Schanbel placed tenth. Placing outside of the top ten were Mary Koehler and Hanna Rauch, who placed eleventh, and Elissa Stanton and Jessica Bushong, who placed 24th.

“I enjoyed this tournament. Kendyll and I did pretty well, but we lost to DBU towards the end of the day after we had already beaten them, so that was a little disappointing,” Jones said. “We are going to come back strong next year and hopefully win it all.”

Sand volleyball and indoor volleyball can feel like two totally different sports. In a sand tournament, teams are doubles, versus in indoor games, there are six players to a team.

“The rules also differ from indoors to sand such as no open hand tips and you can’t have any spin on balls set with your hands,” Jones said. “Sand forces you to become a versatile player, since there is only one other person on your team.”

While St. Edward’s placed three teams in top ten spots, these rankings show a marked drop since sand tournaments in the past.

“We have had a lot of great finishes, including having the first place team in 2010, 2011 and 2012,” said Head Coach Sean Donahue, who helped found the first ever Heartland Conference sand volleyball tournament in 2009.

“The only thing that happens [when you win] is you get a plaque—you can see some of ours around the RCC—and bragging rights, so since there isn’t as much pressure as our indoor season and everyone plays, it makes it fun,” Donahue said.

Given a strict practice schedule, the team of their practice time focusing on court play and very little time preparing for this sand tournament, as it does not impact or affect their standing in any way.

“Having three teams in the top ten, I felt good about our finishes,” Donahue said. “The only improvement would be to win the whole thing next year.”