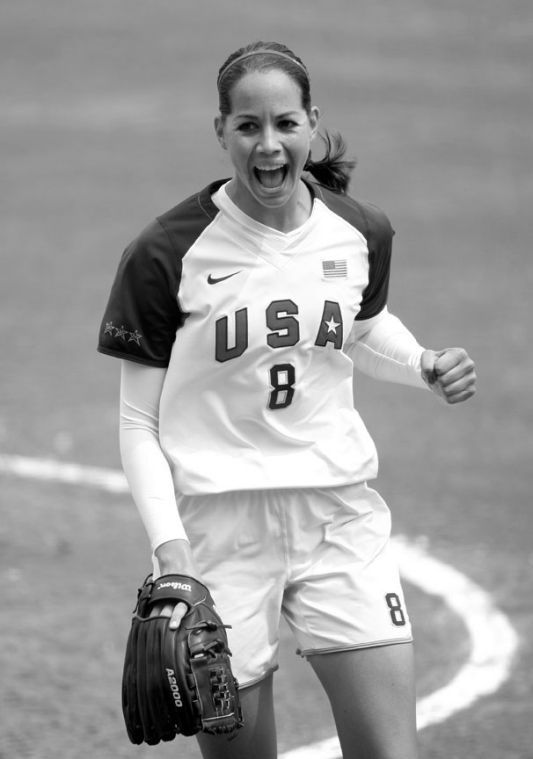 Pitcher Cat Osterman of the United States celebrates a win against Japan in softball semifinals on Wednesday, August 20, 2008, in the Games of the XXIX Olympiad in Beijing, China.

Osterman played softball at Cy Fair school, Cypress Springs. Her time at Cypress Springs included a 33-strikeout performance. She went on to pitch for the Longhorns. During her freshman year, she was named to the National Fastpitch Coaches’ Association Second All Team All-American, as well as the Big 12 First Team and was dubbed Pitcher of the Year. Her freshman year ended with Osterman’s breaking and setting UT single-season records for wins, innings pitched, games started, shutouts, strikeouts, strikeout ratio and appearances.

As a sophomore, Osterman repeated honors as an All-American. She also won the Big 12’s Female Athlete of the Year honor and her first USA Softball National Collegiate Player of The Year Award. Osterman is the only pitcher in Big 12 history to strike out 1,000 batters in only two seasons.

She was scouted for the USA Women’s Softball Team and red-shirted after her sophomore year so that she could go compete. The USA Women’s Softball Team won the gold medal at the 2004 Summer Olympics. After her time in Athens, Osterman returned to the University of Texas and snagged more honors as a junior. Her junior year, Osterman was named the 2005 Sportswoman of the Year by the Women’s Sports Foundation. She continued to break her own records for the Longhorns through her senior year.

She then went on to pitch in the National Pro Fastpitch softball league after being drafted by the Connecticut Brakettes. She went on to play for the Rockford Thunder in 2007.

The USA Women’s Softball Team nabbed the silver medal in the 2008 Summer Olympics in Beijing. Osterman was undefeated in 28 appearances during the USA Softball National Team’s 60-game tour, contributing 15 wins to the team’s 59-and-1 record. The team ultimately lost to Japan in the gold medal match, which ended the team’s winning streak. This upset to Japan was the team’s first loss since 2000. Osterman gave up two runs on three hits while striking out 9 batters.

Osterman was brought on as an assistant coach on the Hilltop in 2011 and has been working with friend and ex-teammate, Lindsay Gardner, another Longhorn and USA National Team alum.