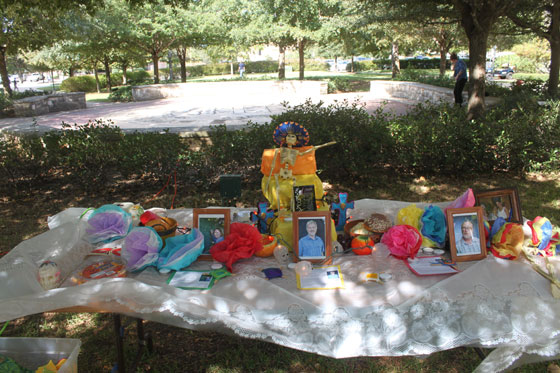 The construction of the Día de los Muertos, Day of the Dead, altar is coordinated by the College Assistance Migrant Program, CAMP. On Oct. 29, the altar debuted in the Our Lady Queen of Peace Chapel.

Though the holiday has pagan roots, it also been integrated into the Catholic religion in Mexico. Day of the Dead is a national holiday in Mexico.

Day of the Dead is also celebrated throughout the United States and other Latin American countries.

The holiday allows family and friends to honor those who have passed away.

Recently, the Hispanic Student Association, HSA, constructed an altar dedicated to the professors who recently passed away.

“We wanted to honor the community of St. Edward’s and they were a huge part of what makes St. Edward’s that tight-knit community,” senior Vanessa Gonzalez, president of HSA, said. “It helps put the event into perspective for the lives that were touched by the professors.”

The construction of the altar coordinated by CAMP coincides with the two holidays Día de los Inocentes on Nov. 1 and Día de los Muertos on Nov. 2. On these days, the veil between the living and the dead world is the thinnest; therefore, souls may cross over.

“Death is not something that should be feared,” Linda Valdez, senior secretary for CAMP, said. “It is an opportunity to celebrate anyone in your life who has moved on. It is a chance to honor them.”

The altar on campus spans six 6-foot tables in the chapel. Traditionally, the altar has to have very specific decorations and items on it. The coordinators of altars strove to include traditional aspects of the altars while incorporating some new elements specific to the St. Edward’s University community.

Traditionally, the altar must have three tiers that are fully decorated with “papel picado” which is brightly-colored tissue paper with designs cut out on them. Each color has specific meaning. For example, the most important paper colors are purple, which stands for pain, white, which stands for hope and pink, which stands for celebration.

Candles are traditionally placed all over the altar, while the top level of the altar must have four candles that signal the four cardinal points. The light of candles are said to illuminate the way for the dead soul upon their return.

Perhaps the most recognizable aspect of the altars is the candy skulls. Three candy skulls are placed on the second level to signify the Holy Trinity. On the third level, a large skull is placed to represent the Giver of Life.

Students, staff and faculty are encouraged to bring personal photos and items belonging to deceased loved ones.

“Although it deals with somber events, in Latin American countries this is a time of celebration of the people who have left our world,” Gonzalez said. “We celebrate their life and the time we got to spend with them.”

By allowing students, faculty and staff to take part in this annual event, the university will continue to build a global community on campus. Some students look forward to the construction of the altar.

“I think it is a good idea to represent a lot of cultures and to give a lot of people the chance to express themselves,” junior Erica Sanabria said.

The altar will remain in the chapel until Nov. 5.