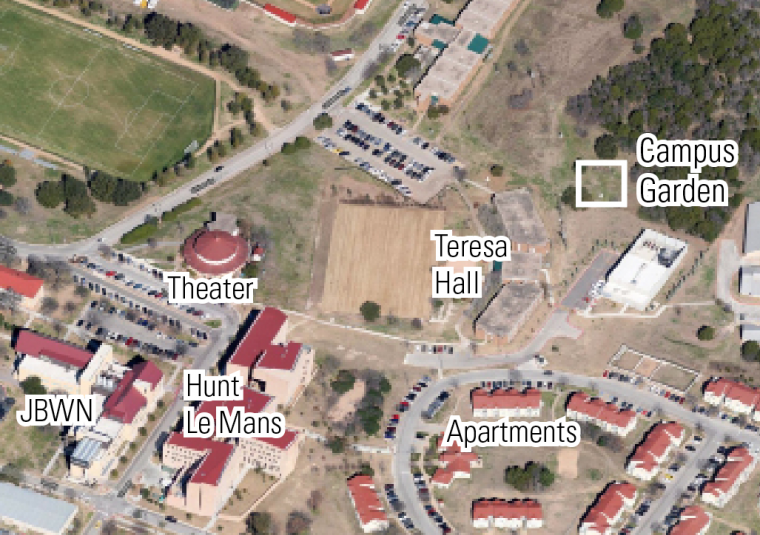 The campus garden is located in a fenced-in plot behind Teresa Hall.

The new leaders of Students for Sustainability have planted their feet in a year filled with productivity to plan a few anticipated new events.  Current co-presidents sophomore Sociology major Andy Hirschfeld and junior Environmental Science and Policy major Janelle Sylvester have passion for sustainable food by working alongside the leadership of former presidents Portia Odell and Corina Solis. They hope to continue through teamwork to build upon the legacy that Odell and Solis created.

“[The previous co-presidents] helped make the club more focused on sustainability issues, and they made the club more official with the administration and the school. We are picking up from where they left off,” Sylvester said.

Hirschfeld discussed the beginning threads of Students for Sustainability, which was formerly known as the Environmental Club.

“It was one of those clubs that was gaining momentum. . . there wasn’t nearly as much work being done as there was at my high school. I wanted to work to change that,” said Hirschfeld. “I felt that this organization had a lot of like-minded people who were working really hard to get that done.”

Hirschfeld believed that he could provide a different perspective on sustainability. He attended all club meetings and began to work as the communications director for the club in the spring semester. Around the same time, the club adopted their current name Students for Sustainability.

Last year, the club managed to resurrect their garden of sustainable foods even during the drought. The garden, located behind Teresa Hall and in front of the Satellie Chiller Plant, was expanded this year after the university granted the club more land.

The co-presidents work closely to expand the garden with senior Environmental Science and Policy major Ashley Shaw, the garden coordinator.

“I’m hoping to plant some native flowers around the perimeter to attract beneficial insects and make the garden stand out more,” Shaw said. “I would really like to see some art out there, which we are in the process of figuring out.”

Expanding the garden is not the organization’s only goal.

“[The] main goal is to have the student body more aware of Students for Sustainability and what we are doing on campus to enhance and promote sustainability,” Sylvester said .

The co-presidents plan to educate students on the true meaning of sustainability.

“This year, we’re trying to really establish . . . what sustainability truly is and the connection between the economy, the environment and social justice,” Hirschfield said.

Shaw said she hopes the organization can also help build a sense of community through its dedication to being green.

“I hope to show everyone that it’s easy and fun to grow your own food and that eating healthy, seasonal food doesn’t have to be a challenge,” Shaw said. “Gardens have this great ability to merge age and socioeconomic gaps in communities.”

Although Students for Sustainability plans to integrate a few changes such as informing the student body of club activities and events, it also intends to further develop one of their plans called the  Green Fund.

“The Green Fund is an initiative that Students for Sustainability has been working on for years,” Sylvester said. “The goal of it is to have a small increase in tuition…that money would go toward sustainability initiatives on campus.”

The Green Fund would be a fee tacked on to tuition every semester, similar to the mandatory Technology Fee.

Such initiatives would include more recycle bins, composting with Bon Appétit and expanding the garden.

With focused goals for their club, both co-presidents of Students for Sustainability wish to carry on the reputation of their club while advancing their mission to educate the student body about sustainable living.