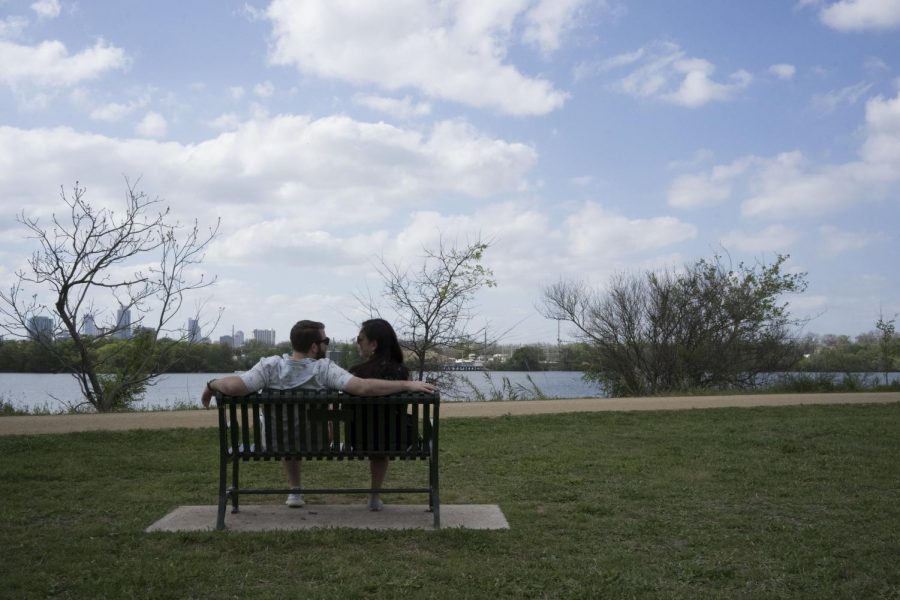 Our campus is known for its stylish pavement catwalks and quirky animal statues, but we seldom discuss our day-to-day, awkward run-ins with exes.

“I feel like dating around campus is intimidating, since it is such a small school. People figure out pretty fast. I know that when I started dating my recent ex, when we became public, people were staring a lot more and asking questions,” said Christopher Ayala, a sophomore Communication major.

Ayala has had two serious relationships at St. Edward’s. He shares that while the first didn’t end well, he is on better terms with his second ex.

“I don’t really mind dating on campus, but I think that lately I am cool with dating off campus, just to get out of the St. Ed’s bubble,” Ayala said.

Logan Stallings, a senior double Writing and Rhetoric and Graphic Design major, admits that she at first intentionally did not date people from St. Edward’s.

“I have not dated anyone from campus. I think it was intentional for a while, but then I started dating somebody from Dallas,” Stallings said. “We were doing this back and forth thing, but that didn’t really work out. So I said, you know what, I am just going to graduate and not really worry about it.”

Stallings shared that the long distance was too much for her to handle. She decided to focus on graduating this year instead.

“I feel like if it’s the right person, then you would make it work, but it really tests it. It begs the question, are you really happy, is it really worth it? If not, then it makes that more clear,” Stallings said.

“On this campus, you notice everybody. Especially if they are attractive,” Jeanet Hernandez, a recent graduate said.

Even if you’re dating abroad, retiring feelings can be a difficult thing. While in France last year, Jeanet Hernandez dated a French citizen for a total of 8 months. It is a romance she recalls fondly, but it was a tumultuous, overseas love nonetheless.

“My ex lives 5,000 miles away, so I can’t imagine what it’s like to have your ex on campus. The breakup was very amicable. We discussed a lot. It was the post breakup that was difficult to transition into,” Hernandez said.

A few months after their breakup, Hernandez’s ex continued to contact her. Because in France it is common to stay friends with past partners, Hernandez had to break the news to her old man that staying friends is not an American disposition.

Hernandez recognizes how challenging it can be to set aside past relationships while on campus. Her sophomore year, Hernandez had a temporary fling with a longtime friend on campus, to which later he said, “I’m sorry if I gave you the wrong idea.” He took Hernandez out to dinner and spent plenty of time with her, but ended up deciding it was a no-go. She decided to study abroad afterwards to take a temporary vacay away from the St. Ed’s lovenest.

Stallings shared a similar emotion in seeing a past fling around campus.

“There is always one person, where I know it didn’t end super great, if I could avoid you, that would be stellar. But we have such a small campus, and it’s impossible,” Stallings said.

The romantic setback led Hernandez to seek out therapy for some time.

“Being led on and then let down, I ended up seeking professional help. It triggered my own anxiety. It made me reevaluate whether or not people are telling me the truth. I did whatever I could to get to France,” Jeanet said.

“In October of that same year, and I think this is the most relatable story to the trauma of dating at St. Ed’s. I noticed this guy, and I had never seen him before,” Hernandez said.

Hernandez said the two of them met in the gym, and would talk when they would see each other around campus. She ended up asking him out one day, acting on what she believed to be interest on both ends. After gleefully promising he would shoot her a text, there he was moving through campus, evading her.

In terms of dealing with breakups, Stallings and Ayala both shared that they rely on friends and keep busy to help them through the temporary, post-breakup bleakness.

“I don’t know if it’s healthy or not, but I rely on my friends a lot. If I am feeling down in the dumps, I don’t like to be by myself as much. I try to do fun stuff,” Stallings said.

Ayala advises to be direct in breakups. He recognizes how small our community is, and how we should expect to see our ex again around campus–the school they also attend.

“If you’re breakup with someone,  do it face to face. When you breakup with someone, you can still be friends with your ex, it’s just a matter of how much respect and admiration there is between you and your ex, and how mature you are as people,” Ayala said. “Especially since it is a small campus. You wanna keep that harmony together. You dated that person for a reason. Obviously it didn’t work out, but that admiration and love was there.”