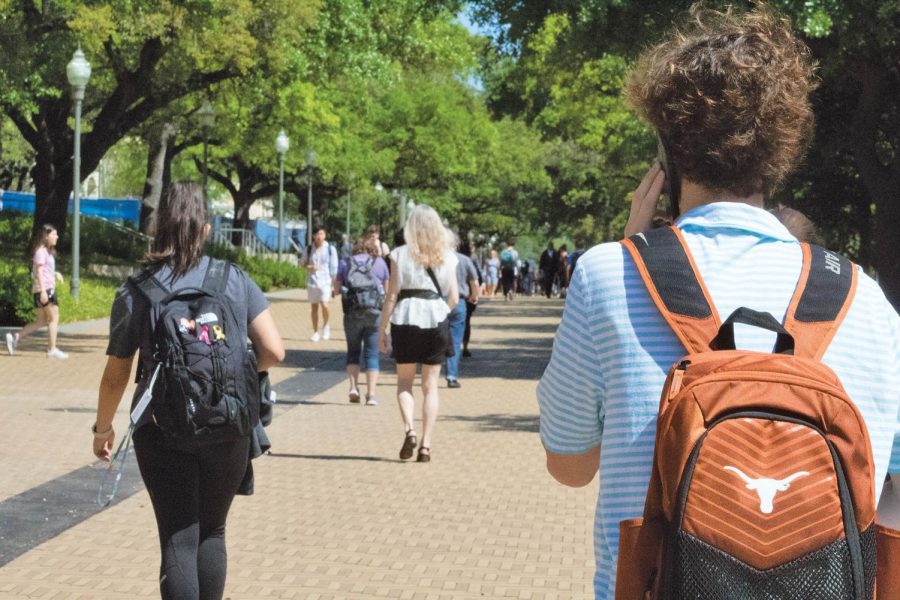 Students make their way to class on UT’s crowded campus.

Austin, as most residents have come to know it, is closely associated with the University of Texas. The 437 acre public university that is home to more than 51,832 students has become a national brand that is watched during major football games or seen in the workplace with over 482,000 registered alumnis.

“I’ve always thought that St. Edward’s lives kind of comfortably in UT’s shadow at times,” St. Edward’s junior Kassandra Rose Montoya said. “We shouldn’t really be compared to them because we have our own vibe and culture being a smaller university. They definitely have more traditions than we do, but I only feel that because they are a bigger university.”

Students are socialized through their perception of their institution’s norms, including peer norms, and their participation in practices and communal events, according to a study done by the New York Times. So when discussing campus cultures as it pertains to UT and St. Ed’s students, one could find it easy to formulate their opinions based solely on their experiences.

“St. Ed’s has always tried to act like UT, and I don’t blame them,” St. Edward’s freshman Henry Clark said. “UT has a lot more going on sports-wise and politics-wise and we’ve always said we are separate from UT, but in reality we are just trying so hard to be like them.”

The discussion behind campus culture and what it means to those who attend these Austin universities has polarized most students — with the exception of Marco Antonio Islas, a UT senior who believes that UT’s campus culture was polarized before the conversation.

“I think the general culture is a liberal one that has a certain dialogue of what is allowed, and any deviation from that sparks outrage,” Islas said. “For that reason, the campus environment is volatile and can change quickly depending on who influences it, like the Young Conservatives of Texas or preachers that come to campus.”

While there is a presence of heavy political disagreements that can often influence or polarize the student body rather quickly, other students find that UT has the ability to polarize their campus in a different way.

“I think UT culture is very polar. For some, it is chaotic and fast-paced and for some it is lonely and depressing. Sometimes a combo of the two,” Andrés Garcia, a UT sophomore, said.

Other UT students seemed to agree with this sentiment.

“I think the UT student body is so large that it is easy to feel isolated, but because of it we’re compelled to form small communities that make us feel at home with our identities,” UT sophomore Gabriela Garcia said.

While each student respectively maneuvers their campus in their own way, that doesn’t stop UT students from formulating their own ideas about the Hilltop.

“I haven’t heard much about St.Ed’s students, but I know a common belief is that everyone who attends that school has money,” Garcia said.”I know that’s not the case because a lot of students rely on scholarships and student loans, but their cost of attendance is a lot higher than UT, so a lot of us tend to think that everyone who goes to St.Ed’s is rich,” she added.

While others may form their own views about St. Edward’s, hilltoppers know how complex the campus culture is.