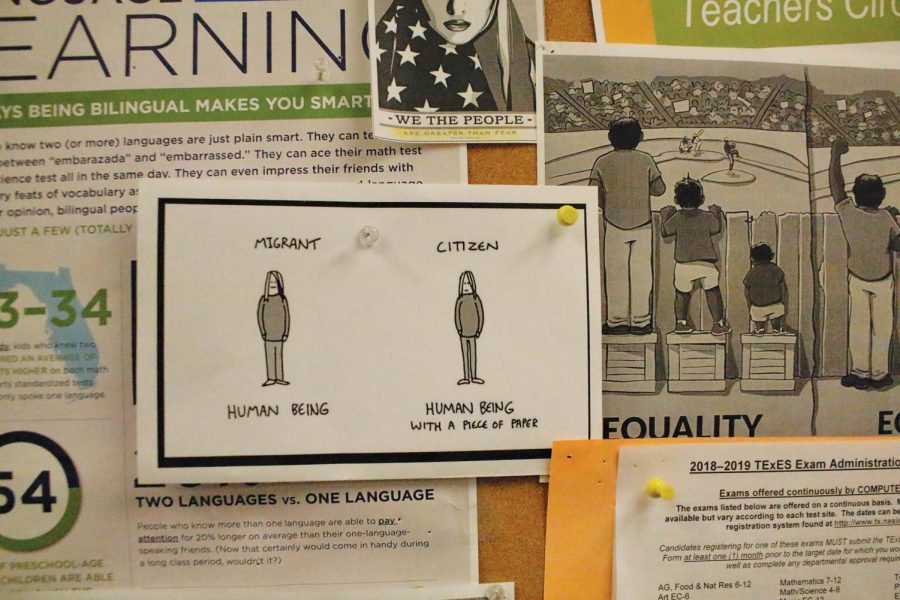 Dr. Hernandez, a mentor to a number of students of color on campus, places a political cartoon outside her office to show support for undocumented students. Hernandez contributes to the food insecurity fund created by Monarchs on the Hilltop and Dr. Glenda Ballard.

St. Edward’s University has a diverse student body. The faculty, however, is not diverse.

This lack of diversity affects relationships that are formed between students and their professors.

According to College Factual, St. Edward’s is above average in terms of student diversity, with the ratio of non-white to white students being 57.1 percent to 37 percent (with 5.8 percent of students classified as ‘Ethnicity Unknown’).

In terms of faculty diversity, roughly 69.2 percent of faculty are white.

Dr. Arcelia Hernandez is an Assistant Professor of Bilingual Education and has been at St. Edward’s since 2011.

When I asked her about student efforts towards diversity, Hernandez pointed out that “we had the Red Doors Manifesto twice.”

“I think that we’re hearing from students who would like to see greater diversity in the curriculum, specifically courses about race, class and gender identity, and that it would really help them be more at home and feel academically supported if they had more faculty that they naturally had an affinity with,” Hernandez said.

Hernandez added that it is critical for students to have professional relationships with faculty who can understand their experiences.

“It’s sort of a safety net so that students can think ‘If something comes up, I know who I can go to, and that person will listen, give me some words of encouragement and might use the right words to help me feel better — maybe even in another language,” Hernandez said.

Hernandez has been a mentor to many students at St. Edward’s, including Jovahana Avila, a senior Political Science major.

“I took a class with Dr. Hernandez called Education and Society, and it was one of the first times I realized that I came from a low-income community and I went to low-income public schools my whole life. Unpacking that was part of the class. A lot of faculty aren’t willing to do that [unpacking], but with her it was so easy because of her willingness to open up about her own story,” Avila recalled.

Hernandez says that apart from being a mentor to students, she has debriefed a number of student-faculty interactions. Hernandez mentions how these experiences can be specific to students of color in “formal, mainstream, English-only cultural spaces.”

“These professors are well-meaning, they want to be as supportive of diverse students as possible, but the message that is delivered and the message that is heard is sometimes very different. So, a little bit of cultural proficiency can go a long way,” Hernandez said.

Hernandez says that it’s on the students and professors to be culturally proficient, but more responsibility falls on professors:

“[I provide] a little cultural coaching for students, but I also have ongoing conversations with my colleagues about developing our own cultural proficiencies. The fact that professors have more power really puts the onus of responsibility on us.”

Similarly, Hernandez thinks that students’ responses to these situations depends on their cultural background:

“I think all students want to be effective and be respectful, that’s sort of the big thing, especially among Latinos — ‘I want to be respectful,’ — but until they learn how to navigate the system, they will struggle with that,” Hernandez stated.

Manuel Piña is a Visiting Instructor of Writing and Rhetoric and the Associate Director of the General Education Writing Program at St. Edward’s.

“I think teaching is an inherently human endeavor. Yes, I teach writing and rhetoric as my area of expertise, but I’m teaching these things to students who are people. It sounds obvious, perhaps, but the truth is, if I don’t see my students as people and put my relationship with them first, then teaching them course content becomes so much harder,” Piña said.

Piña thinks it’s important for students to see themselves in successful people. He cites a 2011 Netflix documentary called “Miss Representation.”

“In the film, Marie Wilson says, “You can’t be what you can’t see.” I’m not sure if she is the originator of that phrase, but the idea behind it is powerful: in order to move up the social ladder, you have to be able to see people who look like you and talk like you and identify with you in those positions of power,” Piña said.

Piña strives to establish bonds with all of his students.

“I share stories with [students] about my past and about growing up as a young Hispanic male in El Paso, Texas. I share stories with them about my academic and family life, about my kids and my life in the US Navy. And, perhaps most importantly, I listen to the stories that they have to tell when they are comfortable enough to share them with me,” Piña said.

Similarly, Avila believes that students of color have an instant connection with faculty of color because there is no cultural barrier. Her mentors at St. Edward’s have helped her academically as well as with things as simple as taking care of her health.

Like Avila, Mariana Sarmiento Riaño is a Latina studying Political Science at St. Edward’s. Unlike Avila, she has found mentors in other areas of the university.

“I know that I have a letter of recommendation at Student Activities. I feel like I have a good foundation of people that really know me, it just wasn’t through academics,” Sarmiento Riaño said.

“I’ve only ever had one non-white professor throughout my three years here. It’s hard when I’m studying Political Science and I haven’t been exposed to many women or people who look like me. I definitely think we do better than other schools, but there’s always room for improvement,” Sarmiento Riaño said.

She added that there are places beyond academics where all students can find a place on campus.

“I’ve gotten to know Joi Torres and Lionel Lopez, who are a part of Diversity and Inclusion on campus. I think if it wasn’t for them, there would be a big void on this campus,” Sarmiento Riaño said.

The Office of Diversity and Inclusion operates student organizations such as Black Student Alliance, Pride Club, and Latino Student Leaders Organization among others.

“Nothing is perfect. Although there are downfalls, I don’t think anyone has malicious intent. Impacts are what matter — intentions, not so much,” Sarmiento Riaño said.