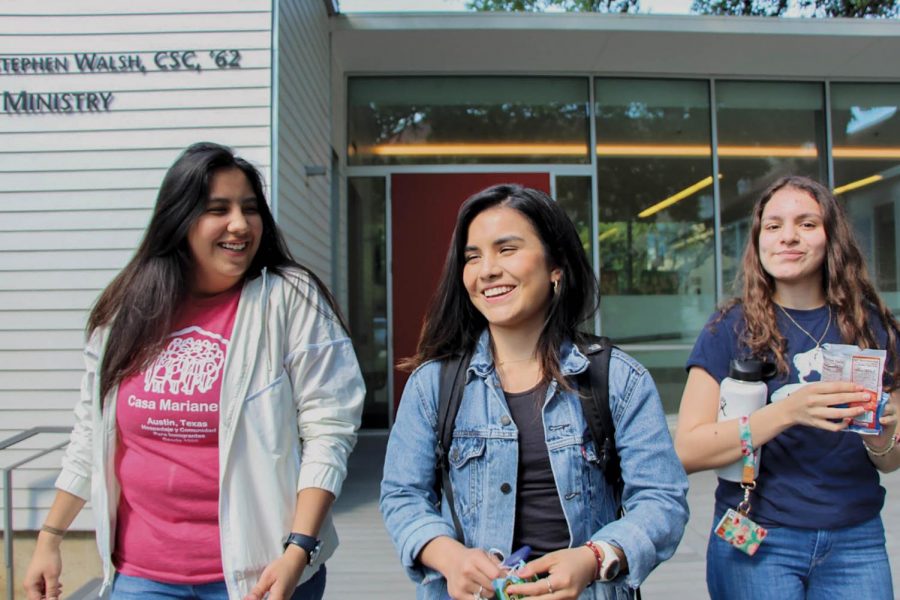 Transfer students find their herd on the hilltop

Whatever the case, new students arriving in an entirely new environment can be scared and incredibly intimidated. Transfer students may feel even more worried, because they feel that the majority of friendships have been established. However, this is not always the case. Among the many transfer students at St. Edward’s, Ella Grace McDonnell and Mireya Torres shared their stories about meeting their new herd on the Hilltop.

“It was different than I expected. I bounced around friend groups a lot until I found ones that felt really authentic. It took a while to adjust, but I finally found a wonderful group of people, one of which is living with me next year,” Sophomore McDonnell said. “For me, it was about finding the balance between being social and taking time to be by yourself.” Staying true to herself is what helped her form her strong friendships in her new home.

While McDonnell loves the new friends she’s made, she makes sure to keep in contact with her friends back home in Portland, Oregon. McDonnell said, “I keep up with friends back home on social media. My best friends from high school and I talk on the phone everyone once in a while. It’s nice to have two really strong sets of relationships in both of my homes.” Taking time to catch up with your friends from home will make sure that no bridges are burned and that you have a support system everywhere you go.

As a second-year student, Torres had a pretty similar experience as McDonnell. Torres said that making friends her first semester was difficult, because she lived off-campus and wasn’t involved in student organizations yet. However, Torres has since then made friendships that she feels will last a lifetime.

Despite her busy schedule, Torres still makes time for her new friends at St. Edward’s. “I make plans to meet with them for lunch or dinner. Sometimes, we get too busy to sit for a meal so instead, we plan on going to the library and studying.” Torres makes sure to get her work done and support her friends all at once.

While Torres loves her newfound friends, she still makes sure to contact her friends back home in Houston, Texas. Torres says, “My friendships back home are definitely cherished. We make it a point to call each other and catch up regularly. Now that we are both becoming busier and busier the phone calls are less frequent, but the love and support is everlasting.”

With 274 transfer students that came in last school year and more coming, it is important that St. Edward’s continues to foster a loving and supportive environment. The university offers new students a close knit community that they seem to love. Living on a small campus and having such an inclusive community helps the transition into a new school be a whole lot less nerve-racking.

As Torres said, “The cool thing about St. Edward’s is that everyone knows everyone! Once I was friends with one person, I was quickly introduced and connected to other people.”

St. Edward’s prides itself on community, and it seems to be working for our new Hilltopper.