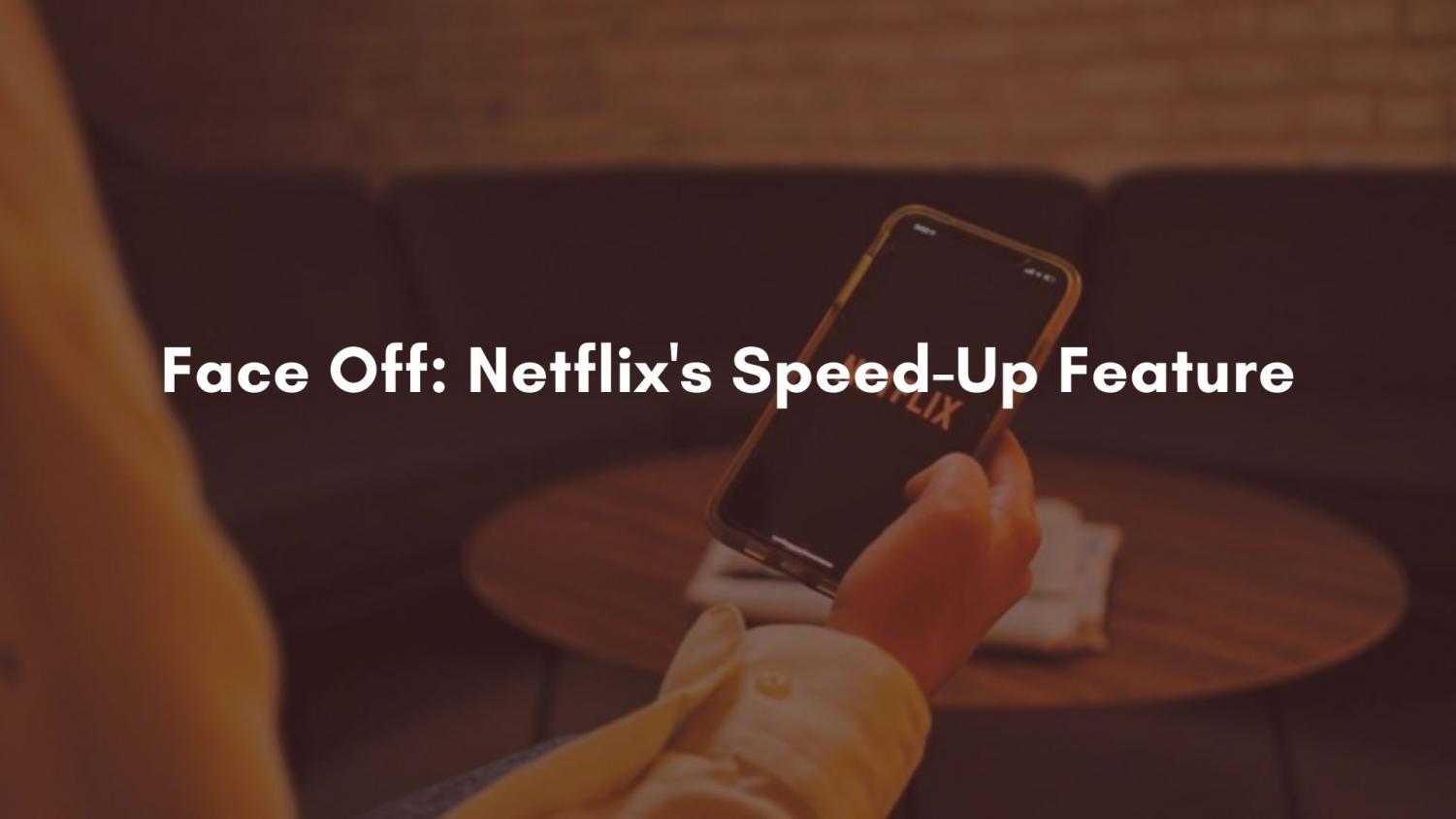 The speed-up feature was announced on Oct. 28 to much criticism, even though Netflix already offers the option of skipping intros. The feature would only be available on mobile devices. Netflix released a statement saying that many viewers have requested this feature for some time now, according to the New York Times. (Juan Diaz / Hilltop Views)

The speed-up feature was announced on Oct. 28 to much criticism, even though Netflix already offers the option of skipping intros. The feature would only be available on mobile devices. Netflix released a statement saying that many viewers have requested this feature for some time now, according to the New York Times.

Films are often seen as a product of love and hard work by the people who make them. Directors can become very protective over the feature-length films they produce as if they were their own children.

Netflix has decided to hop in and stir the pot over the thing filmmakers love the most.

It was recently announced that Netflix would begin introducing the option to slow down or speed up videos available on its streaming platform. The option is only accessible to some users as they are simply testing the new feature.

Soon after the announcement, a large wave of backlash swept in as directors objected to their work being manipulated by those watching it. Actor Aaron Paul (in a now-deleted tweet) and director Judd Apatow were some of the first to vehemently oppose the idea.

“No @Netflix no. Don’t make me have to call every director and show creator on Earth to fight you on this. Save me the time. I will win but it will take a ton of time” Apatow said in a recent tweet.

It is true that directors do have some claim over how their movies are presented. However, when it all boils down, it is selfish for directors to be so against this feature.

First of all, the feature is only available on the Netflix mobile app. No one is trying to storm the movie theatres and fast forward or slow down the movie. It is simply something for people to enjoy in the comfort of their own homes. If directors don’t like it, maybe they shouldn’t sign a deal with Netflix to have their movie on their site.

This feature could also be a great tool for people with additional needs. Say someone has a harder time keeping up with fast-paced scenes. With the slow down feature, they would be able to more clearly understand what is going on in the film. It could even be as simple as someone wanting to watch a movie in a different language and being able to keep up with it more easily.

If that doesn’t convince you, consider this: this feature is not hurting anyone. It’s not going to prevent anyone from watching a certain movie at normal speed. If anything, it will most likely allow more people to watch it at a speed that they are comfortable with. Let us also not forget that this feature has been available for years on DVD players and no one was complaining about that.

Filmmakers, we appreciate your work. This new feature will not stop us from appreciating your work. We would, however, appreciate if you got off your high horses and let people enjoy work in ways that they see fit.

No @Netflix no. Don’t make me have to call every director and show creator on Earth to fight you on this. Save me the time. I will win but it will take a ton of time. Don’t fuck with our timing. We give you nice things. Leave them as they were intended to be seen. https://t.co/xkprLM44oC

Netflix announced that it will be testing an option on its mobile player that will allow users to speed up or slow down content they watch on their devices on Oct. 28.

While this is only a test of a new feature, it is still a feature that takes away from the creators’ work and creates unfair competition for television.

First off, I understand that slowing down a film or television show is helpful to some people. I know that reading subtitles during a foreign film can be hard and some people need extra time to process what they are watching. My problem lies in the ability to speed up a show or movie.

Since Netflix creates its own content, adding a speed up feature creates an unfair advantage to creatives who distribute to actual television channels or release their films in actual movie theaters. To watch television and movies in a traditional way, you can’t speed it up to get through it faster.

Speeding up and slowing down content is not how the creators intended for their content to be shown. No one makes a television season or a movie to be played at 1.5x speed. Jud Apatow added to the conversation by tweeting, “Don’t f— with our timing. We give you nice things. Leave them as they were intended to be seen.”

I don’t see a huge call from users to speed up content. Netflix said that the users who have asked for the feature are “people looking to rewatch their favorite scene.” But if you were going to just skip to your favorite scene, why would you watch everything that has come before it?

Speeding up content on Netflix is a pointless and unneeded feature. The option ruins the content that creators are providing to the streaming service. It also creates an unfair advantage to watch more content than their television and movie theater counterparts. I do not support this change and nobody should if they want to continue receiving some of the best original programming out there.