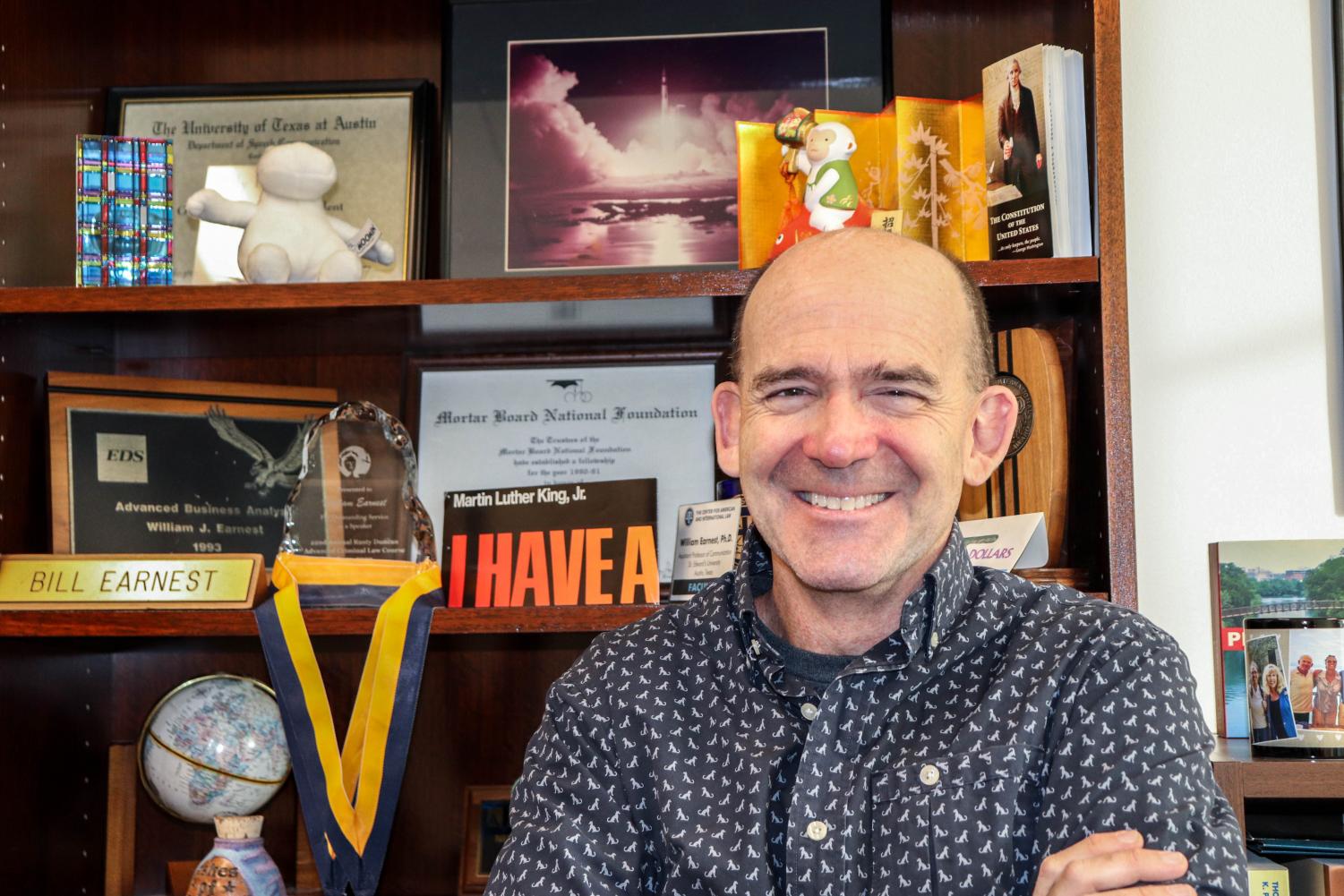 Earnest’s book ‘Lying and Deception in Human Interaction’ is on its third edition.

As the clock struck 5 p.m. on a busy Thursday evening, students settled into their seats in Professor Billy Earnest’s popular class, Lying and Deception.

“Our next test will be over everything we’ve covered so far this semester,” Earnest said. The class collectively groaned in sudden panic, and he broke into laughter. “I’m joking. It’s just chapter six,” he continued, beginning the class with a white lie of his own.

Imagine having to express, at every moment, exactly what you’re thinking and feeling. What would that do to your relationships, friendships— any interpersonal ship, for that matter? It is difficult to imagine a world devoid of evading the truth, and surprising to realize that it is all made possible by the acts of lying and deception. Sounds morally wrong, doesn’t it? Billy Earnest will contest to this, and has dedicated a significant portion of his research to the subject.

“If you’re reading this sentence, you’ve probably lied before.” This is how Earnest’s book “Lying and Deception in Human Interaction” blatantly begins. The book is on it’s third edition, recently released in late December, and explores topics ranging from ethical perspective, to self-deception and even non-human deception.

“Deception is in our nature,” Earnest said. “Evolution could have chosen to remove this characteristic from our species, and it has not done that. I think that’s because you don’t survive life without the ability to fool other people…to not exactly always talk about the unvarnished, absolute truth.”

Earnest’s interest in lying and deception developed by chance, and he credits acclaimed professor of communication Mark Knapp, who he considers a mentor.

“Mark Knapp is just a god in the field of communication studies,” Earnest said. As a masters student at The University of Texas, Earnest became his teaching assistant in the summer of ‘98, which is when Knapp taught Lying and Deception as an undergraduate course for the first time.

“I’m not sure that anybody had taught that course anywhere in comm. studies, across the board,” Earnest said. “He’s like the creator. He kind of initiated this wave of research,” he added. It had been both a graduate topic and special topic, but making it a mainstream focus of a communication department was a completely new venture.

“It just sort of stuck with me,” Earnest said. And it never quite went away. When he came to St. Edward’s in the fall of ‘05, he received permission to recreate the course, and has been teaching it every year since.

Lying is often given a bad rap. People tend to believe the age-old principle that it is immoral in all forms.

“Well, life doesn’t work that way,” Earnest said. “Comm. 101 says that context is everything.” One of the main arguments of his book is that deception could be wonderful, or it could be awful— it simply depends on the situation and particular context, which is why he deems the general principle useless. Virtually any quality, trait or talent can be employed in either a beneficial or detrimental way, and lying is no different.

“How you prove that is you put the word Nazi in front of anything,” Earnest said, comically. “Nazi music, Nazi medicine, Nazi engineering, Nazi science. Uh, no thanks,” he laughed. “Those things inherently aren’t bad, but you could make them bad if the Nazis did them.”

Part of what his course aims to accomplish is to get students to think about the other, more practical ways in which one could lie.

“You could lie in productive ways,” Earnest said. “You could lie in charitable, just and humane ways—but we’ve never been trained or taught to be allowed to think about deception as a positive social tool.”

This, according to Earnest, was Knapp’s “big insight” that he has since gleaned: It is no different from mathematics, engineering, science, art or music, but morally neutral. Whether it is good or bad simply depends on what one does with it.

Lying and Deception, a communication course at its core, also compels students to become more informed communicators. It urges a healthy amount of skepticism towards the influx of claims and interactions within society. This aligns with the college experience itself, as Earnest regards the pursuit of truth as the primary mission of higher education.

“This class is a lot more ‘adult’ in some ways,” Earnest said. “It allows us to dive down into psychology and criminal justice, into family and interpersonal studies. It is a deep dive into ‘the dark side of communication,’ if you will.” Exploration of this so called dark side has gained traction within academia in recent years, with Knapp and Earnest at the helm.

Along with expertise, Earnest frequently offers advice on efficient lying.

“First of all, if you don’t have to lie, don’t,” Earnest said. “It’s like the expression ‘pick your battles.’” He believes that if you could accomplish the same goal by telling the truth, then it is not necessary.

“Always assume that you are going to get caught,” he emphasized. One of the biggest mistakes people make is thinking they will not be busted, or failing to think their course of action through extensively. It is imperative to develop awareness of the benefits and liabilities of telling a lie.

Telling certain lies can be effortless and often subconscious— it is detecting them that poses challenges.

“It is very hard to catch someone in a lie. Most of the time, most liars will get away with their lies,” Earnest said. One of the only chances one has in successful detection is if the lie really, really matters to the liar. In other words, it must be a high-stakes lie.

When thoroughly researching a topic like lying and deception, a bit of cynicism is inevitable. Deception can taint phenomena as immense as universal belief structures. Earnest believes that the ultimate form of control is religion.

“If you could get people to feel guilty about what they’re doing, then they’ll control themselves,” Earnest said. “It’s autopilot for the population.” He perceives it as a game of power and control. “Religion is the opiate of the masses,” he said, quoting German philosopher Karl Marx.

“That’s a very cynical view and I don’t mean it in an atheistic way at all, but let’s face it: all religion is absolutely manmade,” he said. “It’s independent of the question of whether or not there is a god.”

While instructing a course like Lying and Deception may seem like quite a heavy endeavor, Professor Earnest has developed balance in his teaching approach, constantly finding ways to engage students while making the material both interesting and relevant to them.

“They themselves become teachers,” Earnest said. “They teach others about it and at the same time they’re teaching me.” This pieces together a classroom experience that clicks at every level.

“I am three things,” Earnest said.  “A coach, a counselor and—this is the hardest one to label—an enlightener.” He desires to make people aware of things they had not previously thought of, make unique connections, or even look at things in a new manner. Lying and Deception, following this very framework, has quickly become one of the more prominent courses at St. Edward’s.

“Everybody has their gifts and their talents,” Earnest sad. “I’m not an athlete (never gonna happen), I’m not musical (I can’t sing for shit), but you know what? I can teach.”

And this is no white lie of his own.