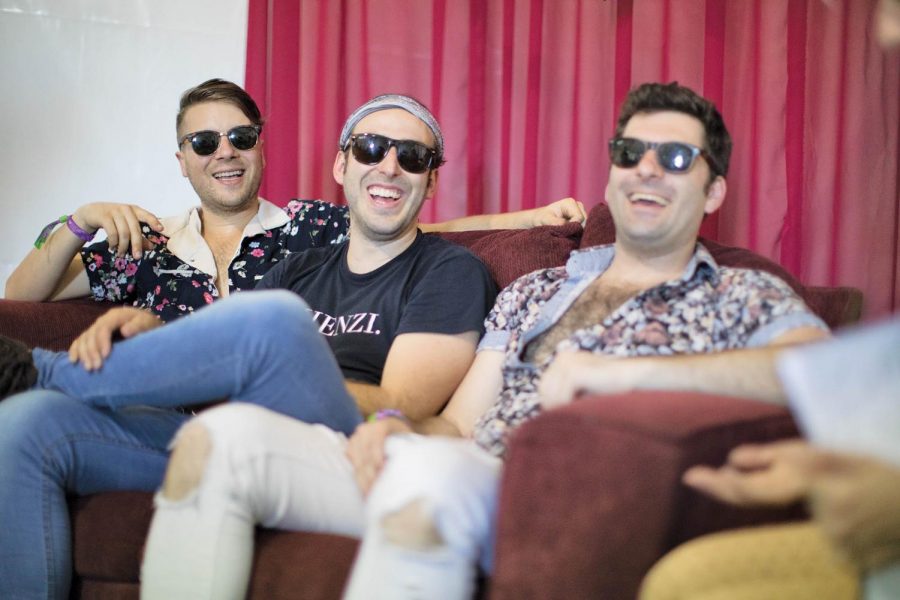 The lights of Antone’s nightclub were dimmed. Candles placed in translucent blue jars sat atop small bar tables throughout the room, casting a sultry glow. Fans and other twenty-somethings hummed in anticipation over half-empty Tito’s cups, dressed for a night on the town. Then the music started. And the party immediately followed.

Last Saturday night, self proclaimed indie-funk band Magic City Hippies brought the flavor of Miami, Florida to Austin, Texas. The second to last show of their headline tour did not disappoint.

The band kicked off their set with “BRNT,” immediately turning up the heat with the liveliest song on their EP, “Hippie Castle.” If waiting in line out in the biting cold wasn’t enough to prove the dedication of fans, then their energized sing-alongs were, as they happily swayed to most every lyric.

“The only thing in life you’re owning is this little moment inside a sphere,” frontman Robby Hunter sang, teasing the timeless virtue of living in the moment and releasing worries. Between the beats, the booze and bright stage lights, this virtue was welcomed wholeheartedly.

Magic City Hippies, formerly known as Robby Hunter Band, is made up of Hunter and multi-instrumentalists Pat Howard and John Coughlin. The band gained a lot of traction after playing the HomeAway stage at Austin City Limits Music Festival last October, and their fanbase only continues to grow.

Tracks like “Franny,” upbeat and synth-rich, were played to a receptive crowd who then experienced hypnosis by groove as the trio slowed it down with “Hush” and “Limestone.” Hunter maintains a balanced rap-to-sing ratio, melding genres almost as smoothly as they do instrumentals. Lyrics are charged with passion and allure, often drawing on anecdotal capsules or plain emotion. The end product is simply infectious.

Hunter performed his own rendition of Aminés “Caroline” as an interlude between original songs, and the crowd ate it up. They also performed “Corazón,” the first song they ever released, which Hunter describes as a tune about falling in love in Argentina (and the wild chain of events that subsequently followed).

The band excels at holding their audience. While their groovy discography alone is enough to induce a good time, their stage presence is the icing on the cake. It is a seduction that borders on playfulness, a suave that’s almost arrogant — and it is just enough to keep a crowd intrigued.

They closed out the night with “Fanfare,” their most popular song (that boasts over eight million streams on Spotify, by the way). Right when the crowd thought the party was over, Hunter jumped onto the stage in a whirlwind of sound and excitement to play fan favorite, “Bull Ride.”

Magic City Hippies are currently in the studio working on their next full-length album. It wouldn’t be surprising to see them headlining a venue like Stubbs within the next few years. Wherever they end up playing, Austin will welcome them with open arms, swaying hips and an insatiable hunger for more.