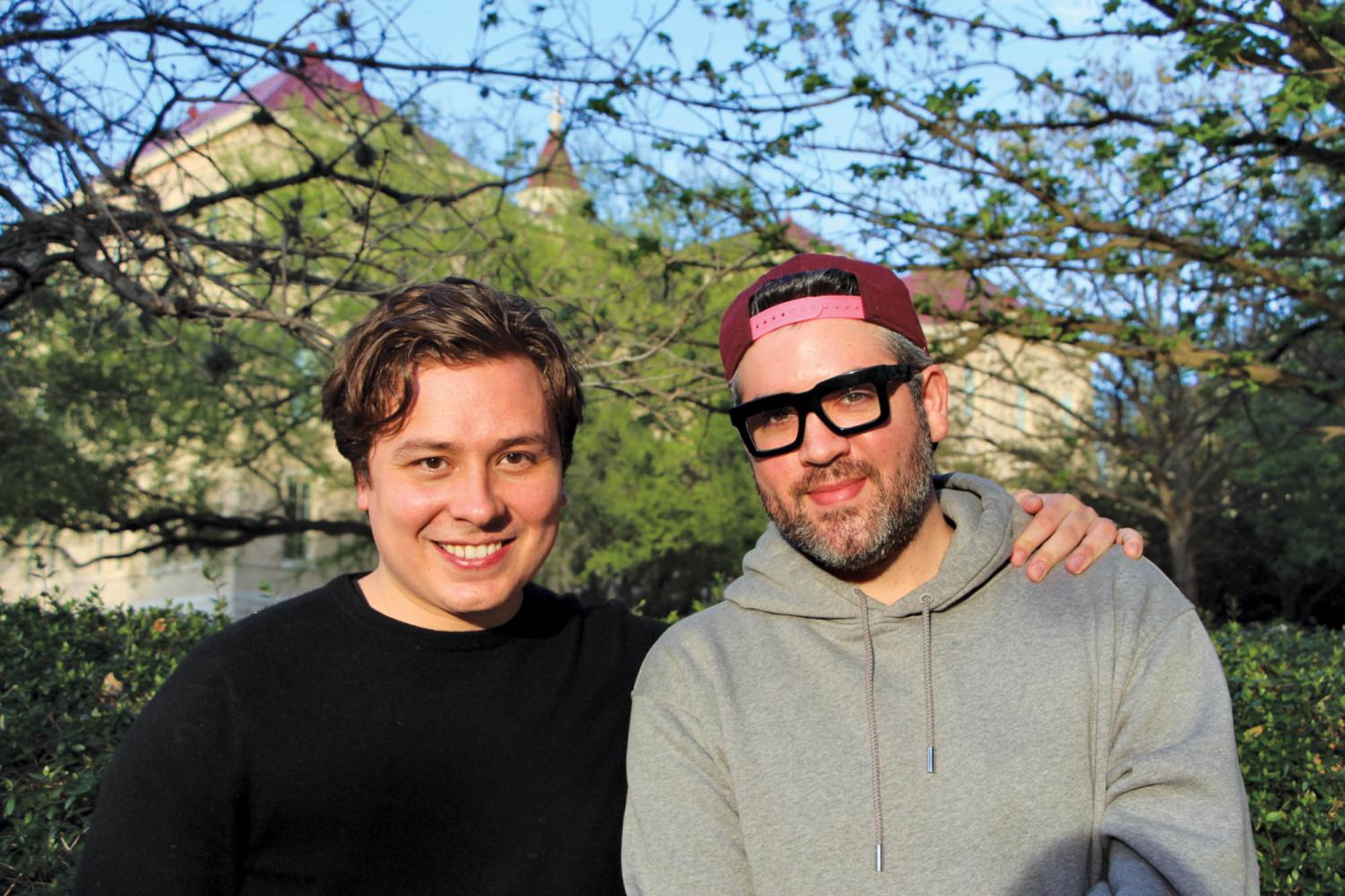 Jessy Price (left) and Brandon Maxwell (right) pose together following the "Now or Never" lecture. Both graduated from SEU in 2008.

On March 14, the alumni sat down for a panel moderated by their former professor, Bill Kennedy, to reflect on their successes, challenges and the network of support they have maintained through it all.

“There’s never gonna be another time in your life that you will be as naive as you are right now and free to do anything,” Maxwell said. As college graduates, the world was their oyster, and New York City was the pearl.

“We all sold so many things, moved in together, lived in a closet and did anything it took to get where we wanted to be,” Maxwell said. The group shared stories of first-job nightmares, professional development and Big Apple antics. Portraits and other candid photos shot throughout the years were displayed in a slideshow behind them as they spoke.

When it came to practical career advice, the alumni did not shy away from integrating personal experiences, passionate opinion and golden takeaways.

“My one piece of advice is: Whatever your goals are, if you have five steps, you need to take each one of those steps and make 10 steps out of it,” Price said. “If you wanna be a photographer, then you need to go and assist, you need to work at a studio, you need to work for someone. It’s a lot more steps to get there than you think it is.”

For Price, a freelance filmmaker and photographer, goals have always been a moving target.

“As my life has changed and one dream comes true, then I start getting greedy and ask ‘What’s more? What more can I get out of it?’ Then you have to go back to the drawing board and create new dreams for yourself,” he said. And this is where he finds himself 10 years later.

Career successes are often preceded by an array of challenges — especially in the competitive, ever-fluid field of photography.

Michelle Leedy, a freelance producer and artist, spoke of the “promotional hustle” that acts as a launchpad in one’s career. This includes marketing yourself to potential employers in a serious and dedicated manner.

“If you’re not promoting yourself, no one is gonna do that for you,” Leedy said. “It’s having the self confidence to know what you’re capable of and to ask for what you want.”

The questions asked during the lecture were prepared by current SEU photocommunications students, one of which is senior Rowan Pruitt.

“I think it was a really enlightening experience,” Pruitt said, following the panel. Earlier that day, the alumni visited her senior seminar class for discussion and critique of student’s work, a pleasant and nerve-wracking surprise to her and her peers.

In an interview following the lecture, Maxwell reflected on being back at his alma mater in the midst of pursuing his whirlwind career. Growing up, his father used to tell him that college would be the best four years of his life.

“I was like ‘Oh, no way. After college is gonna be the best years.’ But it actually was the truth — that college is the best years of your life,” Maxwell said. “You guys have no idea how great you have it here,” he added.

Maxwell ultimately embarked on a different career path than the rest of the group. While fashion was not his first love, it is something that he has been doing since he was a child. He has never really been the scholastic type, as he disclosed, but has always been in tune with the “up in the clouds” nature of his creative ideas.

“Life is kind of just like one foot in front of the other. You can never really plan what your life is gonna be like, but I felt very prepared being from here [St. Edward’s] for the challenges that laid ahead,” Maxwell said. “I think going to school here really taught me a lot about purpose and drive.”

“Now or Never” was the product of over two years of planning. Professor Bill Kennedy, the mastermind behind the event, recalled how it all began as a “shower idea.”

Around a year and a half ago, he ventured up to New York. A simple Facebook post voicing that he’d love to connect with alumni caught the attention of 17. This is when things began to fall into place.

“I had stayed in touch with them and I knew what they were up to…I was amazed and proud of them,” Kennedy said.

He feels elated to have witnessed the blossoming of his former students in such a personal way.

“I think the greatest joy of teaching is when the students that you work with go on to lead successful lives,” he said. “The trick is that you don’t define success one way. That’s always been the guiding principle behind what we try to do here.”

Through a balance of determination, constructive criticism and encouragement, the alumni developed the confidence and skills that they possess today.

“We really need to celebrate these people,” Kennedy said. “And that’s what it’s about — it’s about celebrating their accomplishments.”