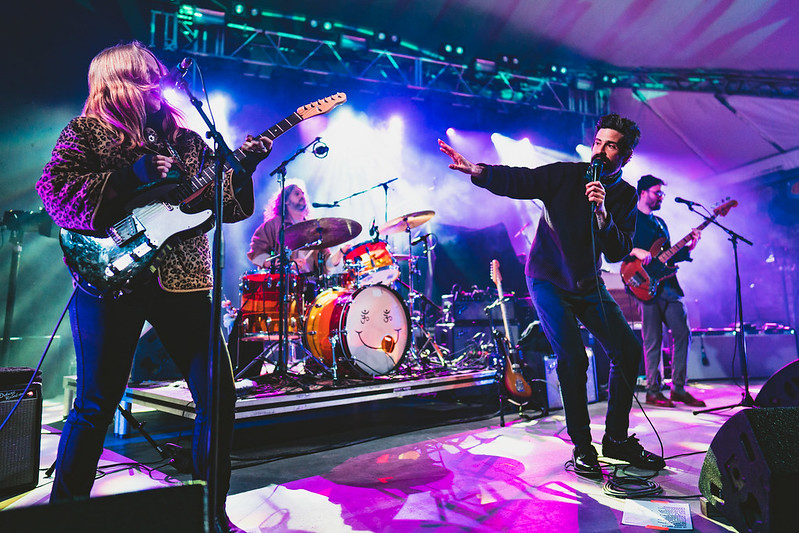 Devendra Banhart was born in Houston, Texas and raised by his mother in Venezuela. His latest album, “Ma,” was released on Sept. 13.

On a cloudy Austin night, the air feels like ice and skies are dark above Stubb’s Waller Creek Amphitheater. But when Devendra Banhart takes the stage, a warmth begins to emit.

Banhart walks up to his mic in silence, guitar in hand as other bandmates take their places. Without a word, the music begins. He gently plucks at his guitar to the simple tune of “Is It Nice?,” the opening song off his latest album, “Ma.” I have never experienced a more tranquil set introduction.

Banhart’s voice is pleasantly haunting as he croons, “Better to understand than to be understood,” and the crowd sways as if under a spell.

“Hola, hola, hola,” he yells out after the second song —  his first words of the night. In comical banter, Banhart informs the crowd of his “big realization” that has been plaguing him all day: “There are very few remixes of the ‘Friends’ theme song.”

Laughs and elated screams quickly fade into the multi-lingual artist’s popular song, “Mi Negrita,” as the stage is engulfed by a purple haze.

“I’m making a hilarious joke,” he says, followed by a dramatic pause. “It’s hot out there.” Perhaps he is right, as the night’s cold breeze gradually morphs into a warm breath of fresh air. “If you tell that joke at a party, credit me,” he adds.

Placing jokes aside for a brief moment, Banhart proposes a deal with the audience: “Buy a pair of socks and give them to someone who doesn’t have a pair of socks,” he says, urging people to help those who may be struggling in the cold weather.

Banhart is a storyteller. Like poetry itself being wed to vocals and an ensemble of expertly-played instruments, Banhart is a mixer of artistic mediums. He tells tales of his journeys, his lessons, his triumphs and burdens through song, making for eccentric lyricism and uninhibited exploration of fantastical themes. His idealism acts as a rejuvenator of hopes and dreams that may have once seemed too far-fetched for our world — but Banhart lives in an entirely different world.

As an artist at the helm of the musical movement termed “freak folk,” a sub-genre of psychedelic folk, in the early 2000s, Banhart knows how to tease the bizarre just enough to remain ever-charming. As he performs, he sustains his characteristic vibrato just long enough to spark discomfort, yet make evident his skill level.

Banhart has also been associated with the New Weird America genre, while most listeners simply describe his music as psychedelic folk.

Love proves to be a running theme throughout the night as Banhart performs “Love Song” and “My Boyfriend’s in the Band,” both off the new album, while visiting older, quirky songs like “Fancy Man” and “Never Seen Such Good Things.”

As funky fan favorite “Fig in Leather” begins to play, Banhart breaks into a little dance, immediately accompanied by the crowd. Each song introduces a new psychedelic visual display on the amphitheater, courtesy of The Mustachio Light Show.

A strong wind sweeps through the crowd. “Get on the dance floor,” he sings, nearly in a hush. The atmosphere intensifies as the lyrics of “Golden Girls,” the opening track off his eighth studio album, “Mala,” are repeated in a bass-heavy frenzy.

An audible “Whoo” from the crowd pierces the night.

“My friend,” Banhart says. “Will you ever sustain and never decay.”