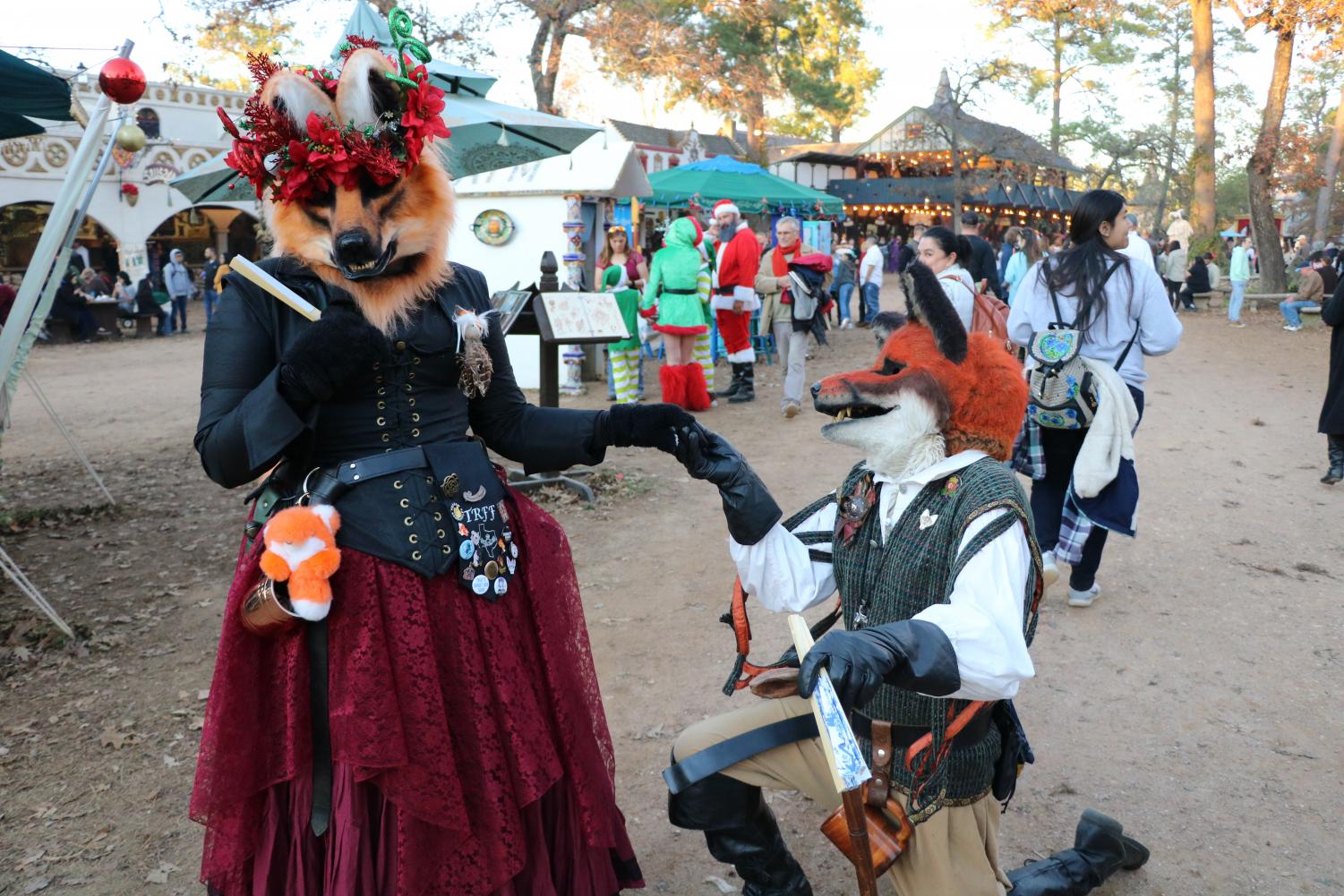 Costume-clad festival-goers stage an unconventional proposal for the camera. "I'll think about it," the female fox responded to the gesture. (Gianni Zorrilla / Hilltop Views)

Costume-clad festival-goers stage an unconventional proposal for the camera. "I'll think about it," the female fox responded to the gesture.

On the outskirts of the Greater Houston area lies a kingdom. While quiet for most of the year, the kingdom comes alive with the arrival of autumn and endures for the season. In this peculiar land people feast on mutton, collect crystals, shoot arrows and joust.

By day, countless shops selling candle wax, feather hats, swords, ceramic pots, wind chimes, fine jewelry and the like line its dirt woodland paths. Nights are adorned by the flickering light of lanterns and ceremonial fire shows as visitors huddle together in loud pubs to be warmed by alcohol and good company.

Loyal subjects of the kingdom travel from near and far to indulge in annual festivities among the trees. In its 45th reigning year, The Texas Renaissance Festival (TRF) continues to be a beacon of adventure for all who seek the mystical.

In 1974, TRF was founded on the grounds of an old strip mining site. Sitting on 55 acres of land, it is the nation’s largest Renaissance theme park featuring merchants, artisans, performers and international food purveyors.

I had never been interested in visiting Todd Mission, Texas until I began attending TRF. With a population of just 114, the town is seemingly dormant. However, this number is launched into the thousands in the fall as the festival attracts over half a million guests annually.

Storybook tales of knights, dragons, fairies and elves suddenly aren’t so fantastical anymore as you wander throughout the woods. A stroll through the Enchanted Forest grants travelers a trip into the unordinary as colorful gardens, mosaic-embellished bridges and living fountains appear at every turn.

There’s nothing quite like the final weekend of Ren Fest, let alone the final day. For some, it was not the end of a chapter, but the end of the storybook itself.

Fantasy Glass has been in operation at TRF for 45 years, 11 of which shop worker Pattie Smith has been a part of. 2019 marks it’s final year at the festival.

Smith, with timid passion, reflected on the shop’s legacy.

“It’s just special,” she said. “It’s a special experience.” As for it coming to an end? “It’s happy and sad all in one.”

At Ravensmiths, a blacksmithing shop located at the forest’s east end, old world methods —  including the use of a 200 year old bellows, 18th century forge, traditional tools and anvil — are employed to create hand-forged iron goods.

Kessler, who recently won her battle against esophagus cancer, finds purpose in her unorthodox, yet fulfilling line of work. She adds to the countless narratives that make TRF more than just a temporary retreat for the average dreamer or escapist.

“If you can imagine it, we can make it,” Ravensmiths’ website states. And they do just that. Displayed on the shop’s old, wooden countertop were rows of custom mug handles, pendants, hooks and utensils for sale.

Ravensmiths is neighbored by Jugglers Nest, where juggling demonstrations by friendly flow-prop artists are held all day. A few shops down is Jodi Bove Hot Glass, a circular glassblowing pavilion and hub for those interested in the art.

I love everything about TRF. From the drive up to Todd Mission (featuring multi-colored foliage lining narrow country roads, cows, horses and other animals grazing sunlit pastures and the thickening woodlands upon approaching festival grounds), to the arrival (featuring rows of towering trees that lead to the kingdom gates), to the pure magic of wandering, it is an immersive experience.

Near the end of the evening, skies grew dark, the woods were overtaken by cool air and I found myself in a dim, tapestry and oriental rug-laden den. Hookah smoke filled the air with sweet fragrance, melding with that of freshly roasted coffee.

The Puffin is the forest’s hidden, eclectic gem. All the culture and craze of TRF somehow meets at this one hole-in-the-wall over drink and smoke. Shop owners, decked out in full costume, feel like distant, wacky 16th century family members as they urge visitors to make themselves at home and periodically break into chant-like song.

Shop owners closed out the night with “Dirty Songs and Sing-Alongs,” a string of live performances of raunchy tunes accompanied by the drunken hollering of patrons — and I can’t think of a better way to wrap up the festivities.

As the sun sets on the 45th annual Texas Renaissance Festival, feelings are bittersweet. As I made the scenic (yet this time dark) drive back into reality, I could not help but think of what it is that attracts humans to events like this.

Events like Ren Fest are like the loud pubs that line dark, wooded paths and attract shivering passersby, or the glow of the hearth that we huddle around for warmth. In essence, they bring us together to collectively tap into dreams and fascinations that, though more easily grasped as children, are still attainable in the present. They’re all still inside of us —  it simply takes the right atmosphere for them to resurface.

I left feeling inspired. I left with a renewed sense of wonder. And god knows I’ll have “Relaxing Medieval, Middle Ages Music” on loop for the coming weeks in order to preserve the feeling. 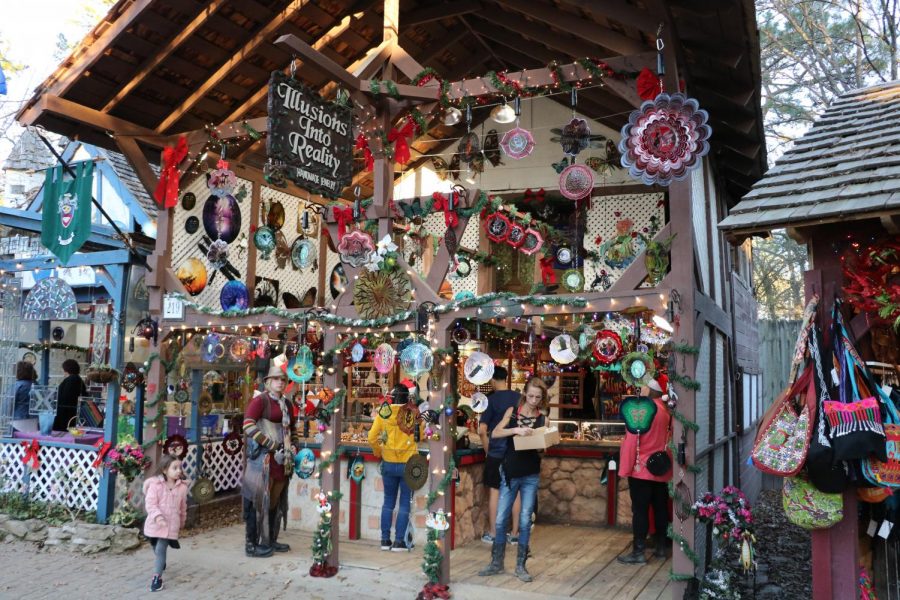